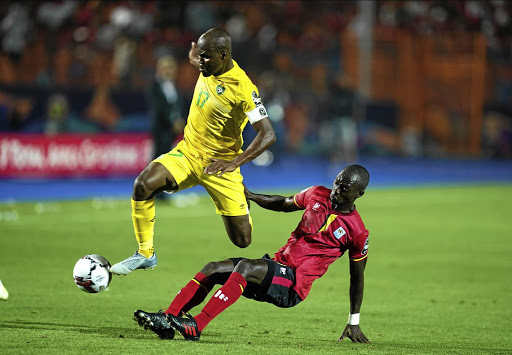 Knowledge Musona of Zimbabwe going past Ronald Brian Ddungu Mukiibi of Uganda during the 2019 African Cup of Nations match between Zimbabwe and Uganda at the Cairo International Stadium in Cairo, Egypt on June 26,2019. (Photo by Ulrik Pedersen/NurPhoto via Getty Images)
Share

The road to World Cup qualification will not be an easy one for Bafana Bafana, who are ranked 71st in the world, after being drawn in a tricky group including Zimbabwe, Ghana and Ethiopia.

Zimbabwe are very familiar with SA football as many of their players ply their trade in the PSL.

The likes of Khama Billiat, Talent Chawaphiwa and Ronald Pfumbidzai are based in the country and will know SA players well.

Others who are based in Europe including Knowledge Musona, Marshall Munetsi and Teenage Hadebe have played in the PSL and many of them will be facing their former teammates in Bafana.

The east Africans will without doubt be the underdogs in this group. However, the team has been struggling over the past few years and failed to qualify for the 2019 Afcon in Egypt after finishing third in Group F of the qualifiers with one point.

They made it to the World Cup qualifiers via the away goals rule against Lesotho after playing 1-1 on aggregate.

The Black Stars are going through a rebuilding phase after the end of their "golden generation". The national team is looking for a different path after parting ways with Kwesi Appiah and replacing him with Akonnor.

The new coach is expected to make some drastic changes. In their most recent tournament appearance, Afcon 2019, they were knocked out at the last 16 stage by Tunisia.