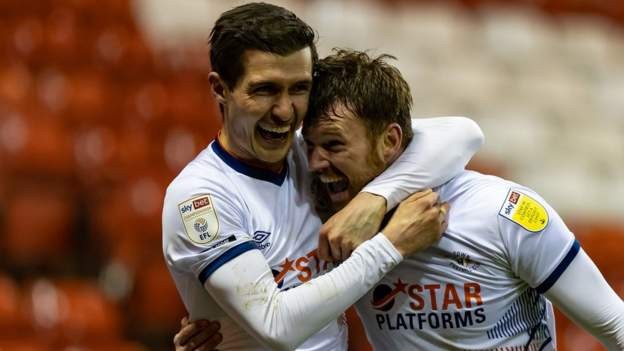 Ryan Tunnicliffe's second-half strike secured back-to-back Championship wins for Luton Town as Nottingham Forest were made to pay for some sloppy finishing.

Tunnicliffe cleverly controlled Pelly Ruddock Mpanzu's enticing cross to steer the ball past Reds goalkeeper Brice Samba as the Hatters won at the City Ground for the first time in 13 league visits.

In-form Forest, who had only lost two of their previous 15 fixtures, faded after the interval but were on top until Tunnicliffe's winner.

But the visitors resisted the pressure and saw out a win which takes them up to 13th place in the table, four points above Forest and nine points behind sixth-placed Cardiff City, who beat Derby County 4-0.

Luton's first victory away to Forest since a team managed by David Pleat overcame Brian Clough's side in March 1983 seemed unlikely during a one-sided first half.

Knockaert stood out, setting up Murray for a decent early chance with a right-wing cross and laying on an even clearer opportunity from the other flank with a fine cross which the veteran striker volleyed over the bar.

Luton, who came from two goals down to beat 3-2 Sheffield Wednesday last time out, made the most of Forest's wastefulness to win consecutive Championship games for the first time since their opening two fixtures of the season.

Tunnicliffe's carefully guided strike, an almost identical chance to the one Murray missed, put them ahead and they could have added to the lead when Elijah Adebayo found Jordan Clark in the area, but his low effort went just wide of the far post from a tight angle.

Simon Sluga (Luton Town) wins a free kick in the defensive half.

Jordan Clark (Luton Town) wins a free kick in the defensive half.

Attempt missed. Cafú (Nottingham Forest) right footed shot from outside the box is high and wide to the right. Assisted by Yuri Ribeiro.

Kal Naismith (Luton Town) wins a free kick in the attacking half.

Yuri Ribeiro (Nottingham Forest) wins a free kick in the defensive half.