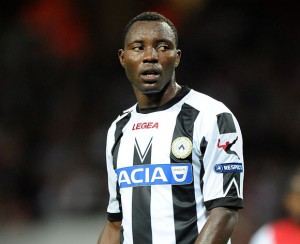 Asamoah has been linked with a move to Juventus and could seal a deal by the end of this week.

Willians' arrival at Stadio Friuli is significant to sell the Ghana midfielder to the Serie A champions Juventus.

The Brazilian, who earned the name 'Pitbull' because of his tenacity in the middle of the park, began his career with Santo Andre but has spent the past three years at Flamengo.

Udinese finished third in Serie A in 2011-12, and will compete in the Champions League qualification play-off round for a second consecutive year.