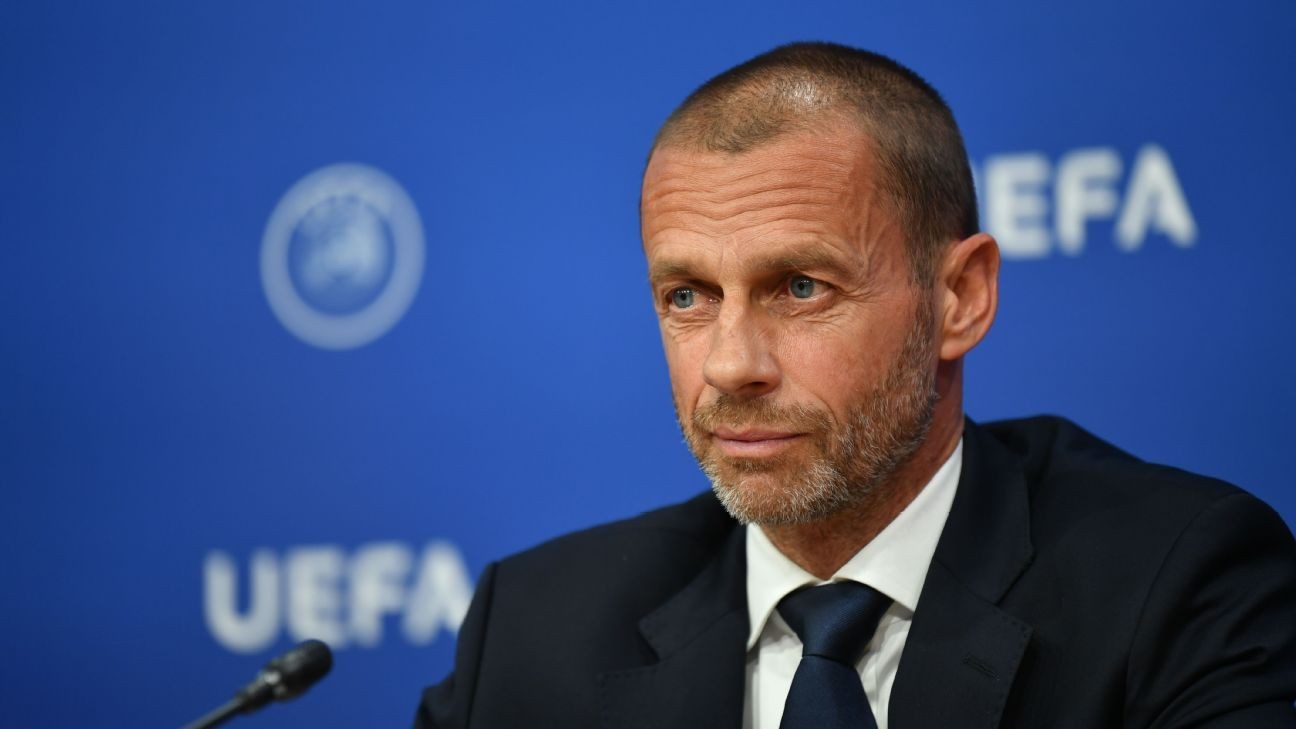 Aleksander Ceferin was not supposed to be having this kind of summer. By this stage, the Champions League and Europa League winners should have been crowned, the transfer market was supposed to be in full swing and the UEFA president was meant to be presiding over the quarterfinals of Euro 2020.

We all know what happened: the coronavirus pandemic swept across the world to remind us, above all, of our own fragility and mortality.

- Extended interview: UEFA president Ceferin talks to ESPN
- What did you miss? The latest from Europe's top leagues
- Stream FC Daily on ESPN+ (U.S. only)

For all that introspection, Ceferin accepts -- perhaps "unfortunately" in some ways -- that normality will return once we have a vaccine. The show must go on and, as he said, "we can't be hostages to a virus forever."

And so, in a wide-ranging interview, Ceferin hit upon a range of topics, from the return of European club competitions next month to Black Lives Matter, reforming Financial Fair Play and the losses suffered by both clubs and federations.

On the return of the Champions League and Europa League

From August 10, the men's and women's Champions League and the men's Europa League will be played from the quarterfinal stage onward in neutral venues of Portugal, Spain and Germany respectively, following a single-leg format.

Before that, the four outstanding men's Champions League last-16 games must take place, either at a neutral venue in Portugal or, if conditions allow, in the home team's stadium. The same principle will apply to the Europa League; if the home team cannot host, games will be played in Germany, as will two ties -- Inter vs. Getafe and Sevilla vs. Roma -- in which the first leg has yet to be played.

"We have to be flexible," Ceferin said. "In our jobs and in our lives. We are literally assessing the situation every day. We will continue to do so until July 9 and then we will decide whether it will be possible to play with spectators on a reduced capacity basis. That's the deadline, the draw for the final phase is the next day. But by July 9 we'll have a medical protocol in place and we'll be able to decide. I can tell you that as of right now there would be no spectators."

On financial losses due to the pandemic

UEFA were hoping the European Championship would generate some $2.5 billion and moving the tournament to next June is expected to cost several hundred million in lost revenue. Playing Euro 2020 -- no, the name will not change -- 12 months later also meant moving the women's Euro from 2021 to 2022.

UEFA's losses have yet to be fully assessed but Ceferin is optimistic: While playing behind closed doors means no box office receipts, broadcasters have not tried to claim money back.

"We are working on assessing the damage, we still don't know if fans will be there or not," he said. "Luckily we expect viewers will be even higher than usual because it will be a two-week event where every football lover will be watching. Our TV partners have been very fair with us. They understand it's a case of "force majeure"; this isn't UEFA's fault. This is something nobody expected. We are in the same boat, we have to help each other and, if we do, we can then come out of this crisis stronger than before."

play2:11UEFA to decide on fans at UCL games on July 9

Aleksander Ceferin reveals that a decision will be made regarding spectators in the stadiums on July 9th.

On Black Lives Matter and diversity

Two weeks ago, Ceferin said UEFA had taken steps to address systemic racism but added that, "clearly, we have to do more and we will do more."

"Racism -- but not just racism; homophobia and sexism too -- are connected to society and football is a reflection of that," he said. "We are in the spotlight; we have a lot of fans and many times people use football to show their idiotic ideology. I think UEFA is doing a lot, but, like I said, slogans and punishments aren't enough.

"We need to speak to governments and policymakers. We've had enough of politicians shouting at UEFA while their own countries are full of systemic racism. We have to unite more in this fight... we at UEFA don't have police, prosecutors or judges to deal with this, we have to work with governments.

"I see a willingness in young people to change that, but I also see a lot of racist, homophobic and sexist thinking all around Europe and this concerns me very much. In fact, I would say the situation in Europe is as bad as I can remember. Right-wing extremism is on the rise every day. The more people are frustrated and unhappy the more they believe in these ideologies. If we don't stand together -- all of us, including governments and parents -- it will be hard to stop."

UEFA have approved measures that will account for the impact of COVID-19, so regulations that limit losses will be relaxed, as long as clubs show that lost income was due to the pandemic. Beyond that, Ceferin insists Financial Fair Play reform will address what he sees as one of the biggest challenges facing the game: the lack of competitive balance between a dozen or so super clubs and everybody else.

"Financial Fair Play has been very successful in achieving its goal," he said. "European clubs as a whole were losing nearly €2 billion a year and in the last two years they've been profitable. So the situation has changed. But now we need to go from Financial Fair Play to achieving a better competitive balance.

"We are trying to find ways to allow clubs to invest more but at the same time ensuring that underprivileged clubs aren't abandoned and left alone. We are discussing concrete measures, but it's too early to share. We need to approach this differently going forward, but it doesn't mean that the way [we] were doing this before was not right."

On competitive balance and the threat of a breakaway superleague

Europe's top 30 clubs by revenue earn almost as much as the rest of the continent combined and, before the pandemic, there was talk of a break away and a formation of a closed superleague. There was also a proposal to reform European competition, having more matches and introducing a promotion/relegation system from the Champions League to the Europa League.

"But our opinion is that people love football as it is," Ceferin said. "They love seeing smaller teams playing bigger teams. We have done studies and they've shown people wouldn't want to watch two top teams playing each other three times a month. I'm sure football the way it is now would be much more interesting than, say, a closed league."

Aleksander Ceferin believes European powers, such as PSG and Dortmund, would have too much to lose by breaking away to for a superleague. Photo by Harold Cunningham - UEFA/UEFA via Getty Images

Ceferin also indicated that he did not believe there was much appetite for a super league, be it from fans and clubs or a brand perspective.

"The Champions League brand is huge," he said. "To create a new brand out of a competition made up only of elite teams would take years and years. Football has to be part of society, we have to educate, we have to develop. We can't do that if we are only run for profit.

"And it's important to say that there were only two clubs seriously discussing creating a closed super league. They even deny now that they discussed it, but we know they did. But it was two clubs, not a big movement. The vast majority of clubs know that football can develop only if everyone has access. Trust me, 99 percent of clubs -- even some very big clubs at the top -- believe in this.

The 2019 World Cup in France was a huge success in terms of viewership, but there is a fear that shifting the women's Euro to 2022 will cause the movement to lose steam.

"I don't think we lost momentum," Ceferin said. "It wouldn't have been good for the women's game to be play the Euros right after the men's Euro next summer. They would have been damaged in terms of sponsors and media attention. But women's football continues to grow every day.

On the international match calendar

The FIFA calendar is the outline agreement between the game's governing body, its six confederations, the European Clubs' Association and FIFPro, the players' union. It regulates when international and club matches are played and outlines the terms for players to be released.

Periodically, there is talk of overhauling the system and there were suggestions that FIFA might look to make their expanded 24-team Club World Cup -- originally scheduled for 2021, but now moved to the summer of 2022 -- into an annual or biennial event.

Such a move would require overhauling the current international match calendar, which is set to expire in 2024. Ceferin made his views clear: UEFA does not favour any sort of radical change.

"It will be an interesting discussion and I'm being diplomatic," he said. "We need to keep the club competitions we have and as many national team matches as we can keep. And we have to see what we can do to lessen the burden on players. So there is no room for a completely new competition. I think the calendar will look quite similar to how it does now."