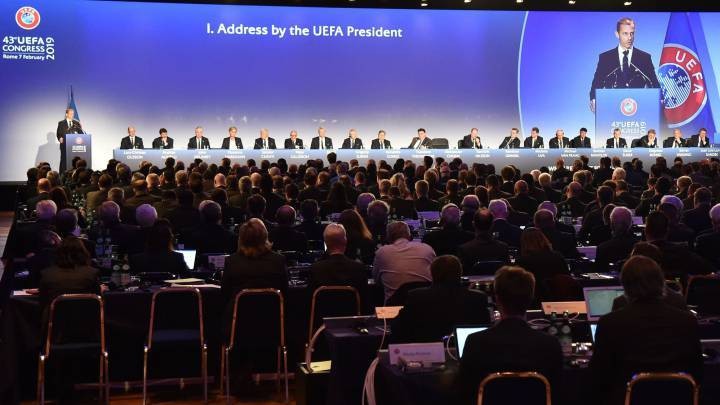 The 55 European federations are focused on getting the biggest leagues on the continent (Spain, England, Italy, France and Germany) done this summer.

UEFA is confident of being able to finish off what remains of the big leagues (Spain, England, Germany, France and Italy) as well as what is remaining in the Champions League, getting things started in June. This despite the continued uncertainty throughout the continent over the coronavirus crisis.

In a teleconference with the 55 European federations it was agreed to suspend the national team friendlies scheduled for the first week of June in order to free up dates on the calendar. The idea being that players can return to their clubs in April/May - depending on how the pandemic develops - for effectively a mini-‘preseason’ training period that will put them in a position to compete in June.

Both LaLiga and the Premier League declared in the meeting that their priority is to finish the domestic competition and the current Champions League, even if this was to go on beyond the summer, taking up some of the 2020-21 season. But they both refused to do so in exchange for sacrificing their cup competitions, something that was raised in the meeting by one of UEFA’s working groups. No one, however, disputed the idea of dispensing with the FIFA dates, and as a first step the friendlies in June have been suspended.

One of the problems posed by ending this season in August, or even dates allocated for the forthcoming season in September, is that the duration of the contracts of several players and coaches would need to be extended beyond 30 June, which is also linked to the conflict over how transfers would work in the summer transfer window. While FIFA is willing to adapt the rules to take account of this, the World Players Union, FIFPro, warns that if this is the case, it should be universal and be applied to all footballers, not just those that clubs want to retain.

Negotiations continue no how fixtures could be adapted for the 20/21 season over the festive period, when players often return to their home continents from Europe, and there was an agreement to maintain discussions as the picture over the crisis becomes clearer in each country.

The desire to finish the biggest competitions in Europe is there, even if the following campaign needs to be amended. The question is if Covid-19 will allow it to happen.