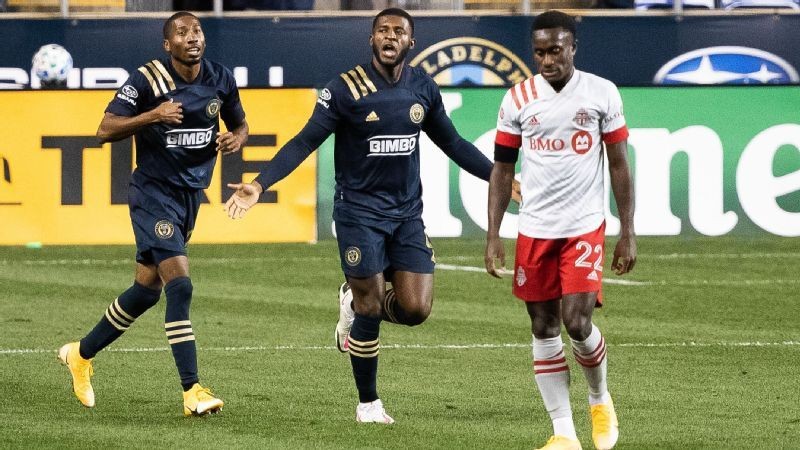 Sergio Santos scored three goals, Jamiro Monteiro added one goal and assisted on another and the host Philadelphia Union moved into first place in the Eastern Conference following a 5-0 win over Toronto FC on Saturday.

It was the fourth hat trick in Union history, while goalkeeper Andre Blake earned his eighth shutout of the season.

Mark McKenzie scored one goal while Kacper Przybylko and Kai Wagner had two assists each for the Union, who improved to 12-3-5, good for 41 points.

The Union and Toronto FC each have 41 points, but the Union vaulted into first thanks to goal differential. Philadelphia is now unbeaten in five in a row and 7-0 at home since the MLS is Back Tournament in July.

Toronto FC conceded only three goals total in the seven previous games before this loss.

The Union had a terrific scoring chance in the sixth minute when Przybylko found himself wide open in front but headed a cross just wide.

Toronto FC entered the game as the No. 1 team in the league in ball possession. But Philadelphia dominated the play in the first half, and ended with 52.9 percent in possession time.

In the 27th minute, the Union went ahead 1-0 as Wagner sent a left-footed cross into the box which was headed into the goal by Santos.

Philadelphia extended its lead to 2-0 in the 34th minute as McKenzie headed a pass by Przybylko past goalkeeper Quentin Westberg.

Toronto FC, who continue to play without injured standout Jozy Altidore, had their first corner kick in the first minute of stoppage time but couldn't convert. Toronto FC had only one shot and none on goal in the first half.

The Union led 9-1 in corner kicks in the first half.

Philadelphia kept the pressure on as Monteiro drilled a shot from the top of the box just under the crossbar for a 3-0 advantage in the 56th minute.

Santos scored his second goal in the 63rd minute when he finished a cross by Wagner for a 4-0 lead. Santos achieved the hat trick in the 68th minute as he received a crisp pass by Brenden Aaronson and tapped the shot into the goal.