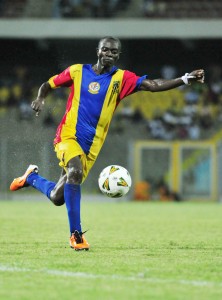 Hearts of Oak midfielder Uriah Asante has dedicated Sundayâ€™s win over New Edubiase to the fans ahead of the climax of the clubâ€™s centenary celebrations this week.

The 19-year-old who opened the scoring in the first half says the win which now sees them on top of the Premier League two points clear off rivals, Asante Kotoko is the best present to be given to the clubâ€™s following as it turns 100 on Friday.

â€œI feel very great that we have been able to get the win which now takes us to the top of the league,â€ he told GHANAsoccernet.com.

â€œThis is what we wanted and I am very happy that we at least have been able to offer our fans something special during this occasion.â€

The club has outlined certain activities such as an awards night and cake cutting ceremony to mark the historic feat which would be round off with an international friendly against Nigeria club Enugu Rangers on Sunday.