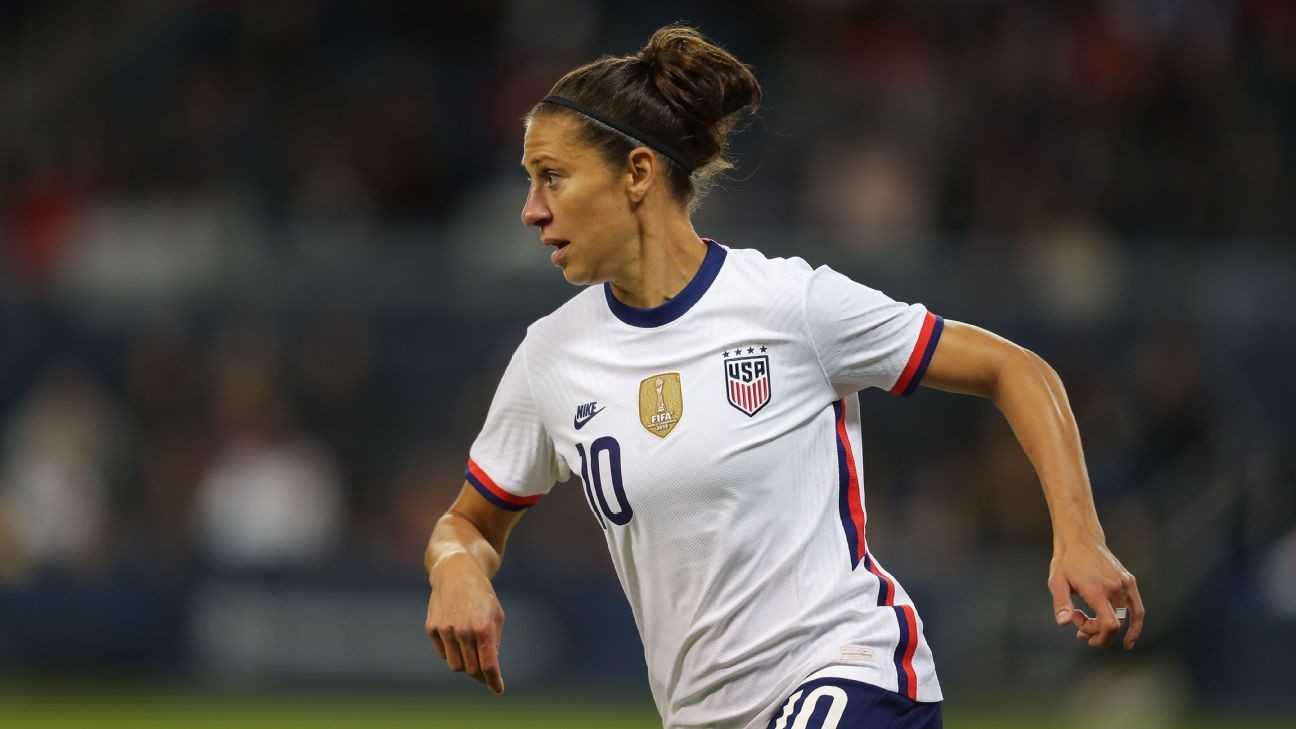 United States women's national team player Carli Lloyd said she is satisfied knowing that she "did give it all I have" ahead of her last game for the USWNT on Tuesday night.

Lloyd, who memorably scored three goals in the opening 16 minutes of the U.S. victory in the 2015 Women's World Cup final, is retiring after a decorated career that includes two World Cup titles and a pair of Olympic gold medals.

USWNT star Carli Lloyd did it her own way, retiring with complicated and dominant legacy63dCaitlin MurrayUSWNT star Lynn Williams: 'If I can inspire only one person, I think I've done my job'6dKathleen McNameeSauerbrunn: 'Heavy' days amid NWSL fallout5dJeff Carlisle

Admired by teammates and fans alike for her fierce determination, Lloyd will say goodbye when the U.S. takes the field against South Korea in St. Paul, Minnesota.

"Sure there were times where maybe my focus was too intense, but I gave it all I had. And I think that's what's really special, walking away from this is knowing that I did give it all I have,'' she said.

"This next phase of mine, I think, is going to be no different. I'm going to find something that I'm passionate about and do it to the best of my ability. I want to eventually start a family with my husband and want to be the best mom and strive to be the best wife that I possibly can," she added.

"Yes, it's going to be a little different. I'm not going to be feeling the pressure of having to perform in World Cups and Olympics, but I got to do that. Now I'll just shift gears and do something different.''

Carl Lloyd is set to make one last competitive appearance for the USWNT before retiring. Omar Vega/Getty Images

Lloyd ranks second in the world for most-ever international appearances after having played in 315 career games. She has scored 134 goals with the U.S., third most in the history of the women's team.

Lloyd hinted for more than a year that she was nearing the end of her career before the Tokyo Olympics. The United States won the bronze medal this summer, with Lloyd scoring a pair of goals in a 4-3 victory over Australia.

She became the first American to score in four different Olympics, and her 10 total goals in the event set a new record among U.S. players.

"She's a soccer icon everywhere in the world. I've said this before: If she was a male soccer player in Europe, we would have statues of Carli Lloyd all over the country, in Europe. I mean, streets would be named after her, complexes, stadiums, everything. That's how big she is,'' U.S. coach Vlatko Andonovski said.

Following the team's 0-0 draw last week against South Korea in Kansas City, Kansas, Lloyd passed her No. 10 jersey to teammate Lindsey Horan, who will wear the number starting in 2022. Horan was honored before the game for her 100th appearance with the team.

"I think it was probably one of the most special moments in my career,'' Horan said, close to tears. "I think Carli Lloyd is truly one of the most incredible women's national team players that has come through the system. And over the past few years, she's been such a role model for me and I've gotten closer and closer with her and gotten to learn so much from her.''

Lloyd, who made her first appearance with the senior national team in 2005, is probably best known for her hat trick that led the United States to a 5-2 victory over Japan in the 2015 World Cup final. Her third goal in that match was a blistering strike from midfield.

At the 2008 Beijing Olympics, Lloyd scored in a 1-0 overtime victory over Brazil for the gold medal. Four years later, she scored both goals in the gold-medal match against Japan at Wembley Stadium, becoming the only player to score winning goals in consecutive Olympic finals.

Along the way, she's said, she tried to play each game as if it were her last. But on Tuesday she said she'll allow herself to enjoy the moment.

"I'm going to let the emotions flow the way they're gonna flow. I think I've been iced-out Carli for so long, and people have always seen that, people haven't seen the different side of me. But I'm going to savor it,'' she said.

"I think it's going to be truly special for one last time to give everything I have for this team, for the crest, for the country, for the fans. I'm going to soak it all in, that's for sure.''

After the United States' run to the 2019 World Cup title, Lloyd said she would try to make the roster for the Tokyo Games, but it would likely be her last major tournament with the national team. When the Olympics were pushed back a year because of the coronavirus pandemic, Lloyd underwent a knee procedure and worked her way back under a new trainer.

She took advantage of the downtime to reconnect with her family, from whom she'd been estranged for much of her career. Her family will be in the stands to cheer for her Tuesday.

"Having them here being able to close out my career is going to be the one of the best things that's ever probably happened to me,'' she said. "Just knowing I can walk away, at peace and content, is really, really special.''