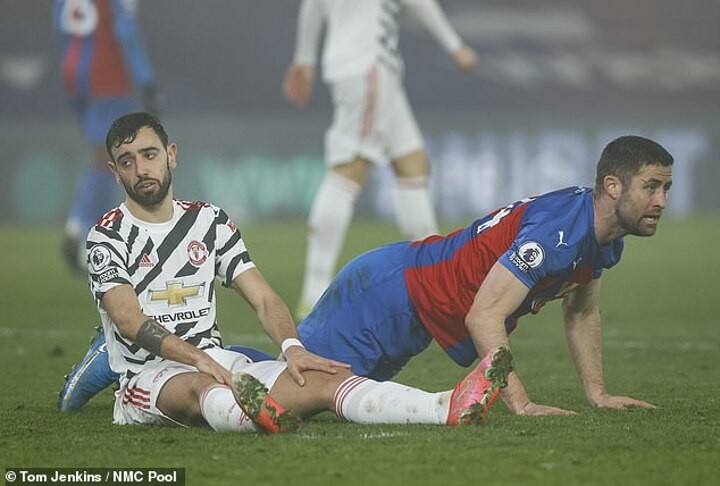 Gary Neville believes Manchester United are 'sleepwalking' into a fight to qualify for the Champions League places.

Ole Gunnar Solskjaer's men looked well off the pace as they recorded a goalless draw at Crystal Palace, spurning the chance to increase their one-point lead over third-place Leicester.

United sit 14 points behind Premier League leaders and city rivals Manchester City ahead of Sunday's derby against the Etihad, and Neville fears defeat there will see them dragged into the race with the likes of Liverpool and Chelsea to play in Europe's premier club competition next season.

'Manchester United have been worse in this second half than the first,' Neville said while on commentary for Sky Sports at Selhurst Park. 'Going to the Etihad on Sunday they have put themselves under pressure.

'They're sleepwalking into a top four race when it could be so much more comfortable for them. They are so lethargic, there is no urgency, I am expecting them to throw the kitchen sink at it.

'It is almost like they think it is ok to draw this game, that they don't see the danger of doing so. If they lose at Etihad and results go against them there will be teams all in and around them.

'There is not a lot of fight out there, they just look like they want the game to end. They have been sleepwalking through this game, poor, really poor.'

Then speaking after the game, Neville added: 'We know fans aren't in stadium and we know there's been a lot of football, but they did really look lethargic tonight and well off it.

'The body language just looked really drained. I thought progress in the last few weeks had been made and it gave me a sense that they would cement that second place by picking up three points at places like Crystal Palace and against Sheffield United and West Brom.

'But they are now making it really hard for themselves, if you are Liverpool and Chelsea watching that tonight you are thinking "right we are in with a right chance because they looked leggy".

'Manchester United have got to find something from somewhere. There was no sort of urgency at the end of the game, You expect United to be throwing everything at it, but not even some of the young lads who came on tried to do something and take a risk and win the game.

'But maybe there was a fear that Crystal Palace would go on counter-attacks. It was not a good night, and you cannot have too many performances like that.

'I have said in the past that when Louis van Gaal was the manager or Jose Mourinho was the manager, you can win, you can lose, you can draw, but you cannot be boring, and that was boring tonight watching that.'