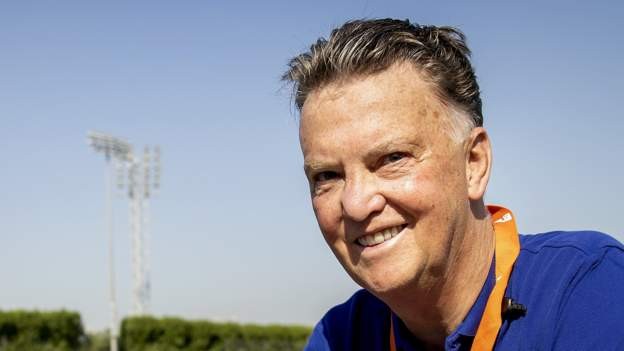 Di Maria played under Van Gaal at Manchester United and called him the "worst" coachexternal-link of his career after his one-year stay in England.

"I don't like it that Angel said that, it's a pity," said Van Gaal.

"But sometimes a head coach has to take decisions that don't always end well."

Di Maria, who sat out the last-16 victory over Australia with a thigh problem, joined United from Real Madrid for £59.7m in 2014, but was sold to Paris St-Germain the following summer after starting just 20 Premier League games.

Speaking at a news conference on Thursday, the Dutch boss jokingly used his relationship with forward Memphis Depay, who also struggled under him at United, as an example of how relationships can alter over time.

"He (Di Maria) is one of the very few players who has ever said that, normally it's the other way round," said Van Gaal, before suggesting he and Depay were now close enough that he would happily give the forward a kiss.

The Netherlands expect to have a fully-fit squad to choose from as they face Argentina in a repeat of the 2014 World Cup semi-final, which was decided by a penalty shootout.

Head coach Van Gaal named an unchanged team in the last 16 with Depay starting back-to-back games for the first time since September.

Argentina's Di Maria has returned to training after missing the win over Australia because of a quadriceps issue.

Rodrigo de Paul will be assessed.

Whoever wins this tie, it is likely to mean the end of the road for at least one footballing legend at a World Cup.

Netherlands coach Louis van Gaal is probably in his last job in management, while this is almost certainly Argentina icon Lionel Messi's final tournament on this stage.

Van Gaal is doing things differently to the traditional 4-3-3 the Dutch usually play, but they have been effective, even if they are not exactly beautiful to watch in the way their great teams of the past were.

Argentina have played with a little more panache on their way to this stage, helped by some pieces of brilliance from Messi, but they are a team with issues of their own.

You can definitely get at them and create chances, and I feel like Netherlands forwards Depay and Cody Gakpo might get some good opportunities.

Have I mentioned before now that the Netherlands are my left-field pick for the tournament? As I said, they don't play the prettiest football, but they get the job done. I'm sticking with them here, too.

Argentina's fans are the best at this World Cup; they are certainly the loudest. Any team with Messi in their side won't go quietly, but they might be heading home soon.

Prediction: 2-1 to the Netherlands

The 2014 World Cup semi-final is the most recent meeting between the two nations. Argentina triumphed 4-2 in a penalty shootout after a goalless 120 minutes. Ron Vlaar and Wesley Sneijder had penalties saved by Sergio Romero. Argentina converted all four penalties, including their first one by Lionel Messi.The Netherlands can qualify for the World Cup semi-finals for the fourth time, after 1998, 2010 and 2014. There was no semi-final stage in 1974 and 1978 when they reached the final.Argentina can reach the semis of the World Cup for the fifth time, after 1930, 1986, 1990 and 2014. They won the competition for the first time in 1978 when there were no semi-finals.Messi has scored 789 goals in 1,000 official games for club and country in all competitions. He netted in his 1,000th match in the 2-1 win over Australia in the last 16.