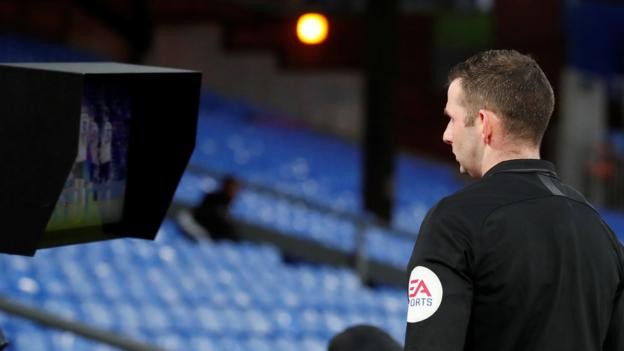 Premier League referees have been told to start using pitchside monitors for red card decisions where it is felt they should have the final say.

The Professional Game Match Officials Limited, the body that manages elite referees, has issued the guidance.

The only time the monitors have been used this season is by Michael Oliver in an FA Cup third-round tie between Crystal Palace and Derby County.

As a result, he upgraded a yellow card for Palace's Luka Milivojevic to a red.

This is the sort of incident where they are now set to be used in top-flight games.

The move was welcomed by Premier League managers. Speaking on Friday Manchester City manager Pep Guardiola said "It is a positive move. The referee will be taking responsibility himself. I like that."

One case that could potentially be handled differently in future was that of Arsenal forward Pierre-Emerick Aubameyang's sending off against Crystal Palace on 11 January.

Aubameyang, 30, was initially given a yellow card by referee Paul Tierney for a tackle on midfielder Max Meyer, but the decision was changed to a red by the video assistant referee.

It is felt by the Premier League that Tierney should probably have made the final call to confirm his authority and make the decision more likely to be accepted by both players and fans inside the stadium.

The Gunners appealed against the decision but that was rejected on Wednesday, meaning Gabon international Aubameyang will miss Premier League games against Sheffield United and Chelsea, and the FA Cup fourth-round tie at Bournemouth.