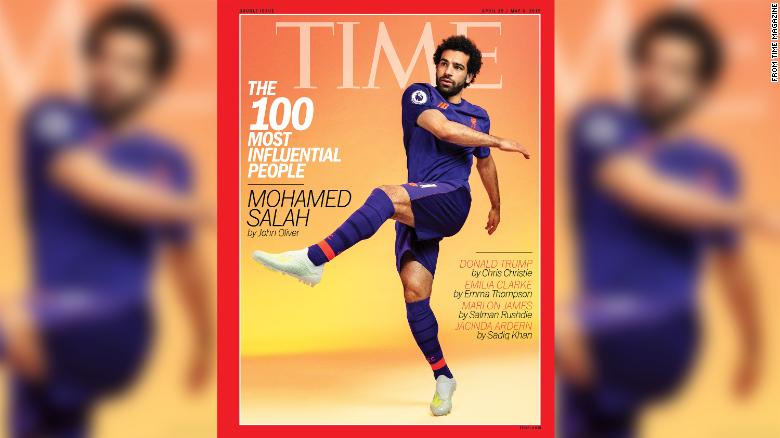 Mohamed Salah has made the frontcover of the Time Magazine

Liverpool forward Mohamed Salah is one of six TIME 100 cover stars, the magazine's annual list of the world's most influential people.

While this is the first time Salah has featured on the list, Woods -- who won the Masters on Sunday in one of sport's greatest comeback stories -- has featured three times and LA Lakers' James four.

Two-time grand slam champion Osaka, forward Morgan -- who is expected to star in this year's Women's World Cup -- and double Olympic champion Semenya are among a record 48 women on the list.

Salah's global popularity surged last year when he enjoyed a breakthrough season with Liverpool, scoring 44 goals in the 2017-18 campaign and helping the English Premier League side reach the Champions League final.

While goals haven't flowed as freely for the Egyptian this campaign, the forward is still this season's joint-leading scorer in the EPL and his wonder strike last weekend helped Liverpool defeat Chelsea, continuing the Reds' pursuit of a first Premier League title.

Egyptian soccer superstar Mohamed Salah has called on men in his country and across the Muslim world to treat women with more respect.

In an interview with TIME, the Liverpool striker spoke frankly for the first time about the importance of women’s equality. “I think we need to change the way we treat women in our culture,” Salah said. “It’s not optional.”

He said seeing how women were treated “in my culture and in the Middle East” had changed the way he thought about gender relations. “I support the woman more than I did before, because I feel like she deserves more than what they give her now, at the moment.”

After leading his country to the FIFA World Cup in 2018 for the first time in 28 years, Salah has become an icon in Egypt and across the region. In the interview, he said soccer fans in the Middle East “feel like I’m their son.”

Salah, 26, admitted there was a “little bit of pressure” that came with being a role model, but also that it made him “proud” and pushed him to be a better soccer player.

“To be the first Egyptian in [this] situation and no one has done this before … it’s something different,” he said.

His favorite way to unwind after a game, he said, is spending time with his 5-year-old daughter, and being one of the top players in world football hasn’t changed his lifestyle.

Salah was named in the 2019 TIME 100 list of the world’s most influential people, and appears on one of the issue’s six covers.

Inside, Liverpool fan and HBO star John Oliver pays tribute to the soccer player as an “iconic figure for Egyptians, Scousers and Muslims the world over.”

Watch interview with Mohamed Salah below