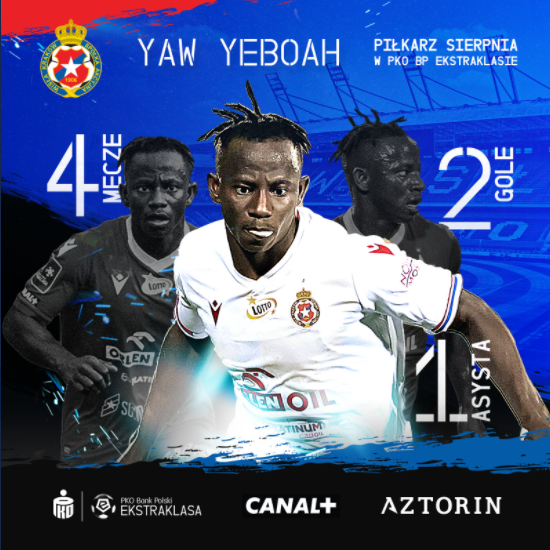 Wilsa Krakow forward Yaw Yeboah has thanked the players and fans after winning the Ekstraklasa Player of the Month for August.

The 24-year-old scored an impressive goal against Gornik in the league from a brilliant individual solo effort that went viral in the month.

In August, Wisla recorded two defeats and ended up winning two games including one against the current champions.

Yaw Yeboah scored two goals in a total of six goals scored by the club.

A hit in the match against Górnik Leczna had a wide impact in the world of football, making him a Puskus award contender

Yeboah in addition provided an assist in the goal that gave his team victory over Legia Warszawa.

The Ghana U-23 captain in a video showed appreciation to all who voted for him to win the award.

"Hi I would like to say big thanks to all the players who voted for me to win Player of the Month. It means alot to me to win this award".

Yeboah becomes the first Ghanaian player to be awarded the Footballer of the Month award in Poland.