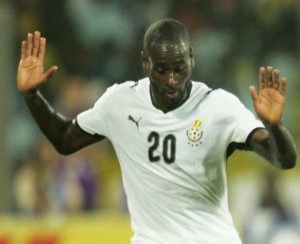 Ghana winger Quincy Owusu Abeyie fired Panathinaikos to the top of the Greek league with his first goal for the club on Sunday.

The 25-year-old scored for the club as they secured a 3-2 away win over Xanthi Skoda.

He outwitted four defenders in the 56th minute before firing into an acute angle to give Panathinaikos a 3-0 lead but a late rally from the home side made for an anxious finishing for the giants.

It was his first goal for Panathinaikos since joining them from Spanish sideMalagaat the start of the season.

The victory took them to the top of the table with 10 points ahead of rival Olympiakos who are also on 10 points but with a lesser goal difference.

The goal comes in a good week for the winger who got a recall to the Black Stars after a one-year absence.

He was part of the team that playedNigeriaandSudanover the past six days.

Watch video of Quincy's goal below: