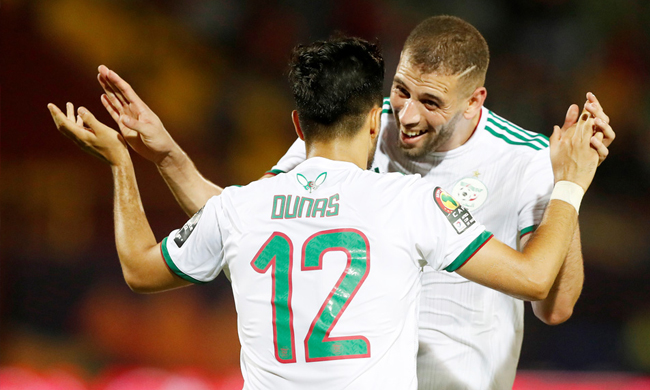 Algeria's Adam Ounas scored twice and Islam Slimani also netted in a 3-0 win over Tanzania as they finished top of Group C at the Africa Cup of Nations on Monday after their second-string side proved far too strong for their opponents.

The goals all came in the last 10 minutes of the first half as the pace of the Algerians and the accuracy of their passes cut open the Tanzanian defence almost at will.

The victory meant Algeria matched hosts Egypt and Morocco with a full haul of nine points in the group stage, while Tanzania finished bottom as they returned to the tournament for the first time since 1980.

Algeria will face a third-placed finisher in the last 16.

Algeria made nine changes, having already secured qualification after a morale-boosting win over Senegal in their previous match, using the opportunity to rest regulars before the start of the knockout stages at the weekend.

But even with a fresh look, Algeria were far more polished than Tanzania and went almost immediately on the attack with teenager Hichem Boudaoui missing a good opportunity inside the opening two minutes.

There were several half chances that followed before Slimani ran onto a long ball between two defenders and finished with aplomb for the 35th minute opener.

The striker then played a clever one-two to set up Ounas for the second goal four minutes later.

On the stroke of halftime, Slimani was again the provider with a long pass that allowed Ounas to outsprint the defence, round the goalkeeper and finish from a tight angle.

Algeria, who brought Riyad Mahrez on for the last 20 minutes, lacked the same urgency in the second half but were still dominant.

Tanzania’s English-based striker Adi Yussuf might have grabbed a consolation goal in the last minute but headed narrowly over the bar.