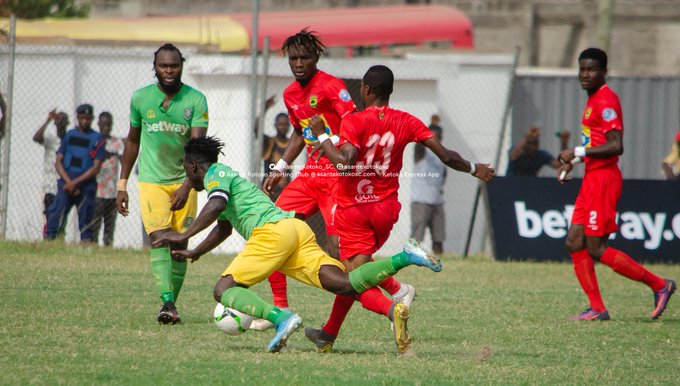 He scored in the final minute of added time with what was the last chance of the match.

The game played at the Nana Agyemang Badu was characterized by controversy. First Kotoko arrived less than 40 minutes to start of the match.

Then despite not receiving any red cards, both sides decided to start the game with their 11th – and final – players sitting on the touchlines.

As such, the teams took each other on in the first half with a player less than they could have on the pitch.

Aduana dominated the first half but failed to break Kotoko. The had plenty of set pieces in advantageous positions but could not trouble the Kotoko goalkeeper Kwame Baah.

The Porcupine Warriors failed to produce anything meaningful as their play were limited to defending deep and relying on counter-attacks.

Aduana returned to the second half with the same ambition of winning.

But it could have been a different story had not produced an exceptional tackle to halt a move by Kotoko which was likely to result in a goal with the game heading into added time.

Few minutes later, defender Bioh went past two Kotoko players before unleashing a low drive into the net to send Dormaa into a frenzy.

The win takes Aduana to second while Kotoko have slipped to fourth.