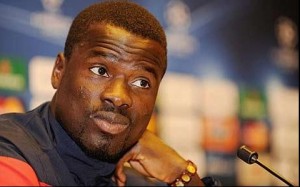 If you bore Emmanuel Eboue, he will do stuff to your ears. A reporter for Galatasaray TV found this out after the club's 2-0 win against Istanbul BBSK as he and Eboue waited to begin an interview.

The Ivory Coast international entertained himself by touching the stoic reporter's ear and when the interview ended, Eboue continued his shenanigans by slapping the cameraman's midsection, and blowing into the reporter's other ear as he finished his bit.

The reporter ended up sharing a laugh with Eboue -- a response that was probably very different from Arsene Wenger's when the defender did these things to him in his days with Arsenal.

Watch video of the funny comedy from Eboue below