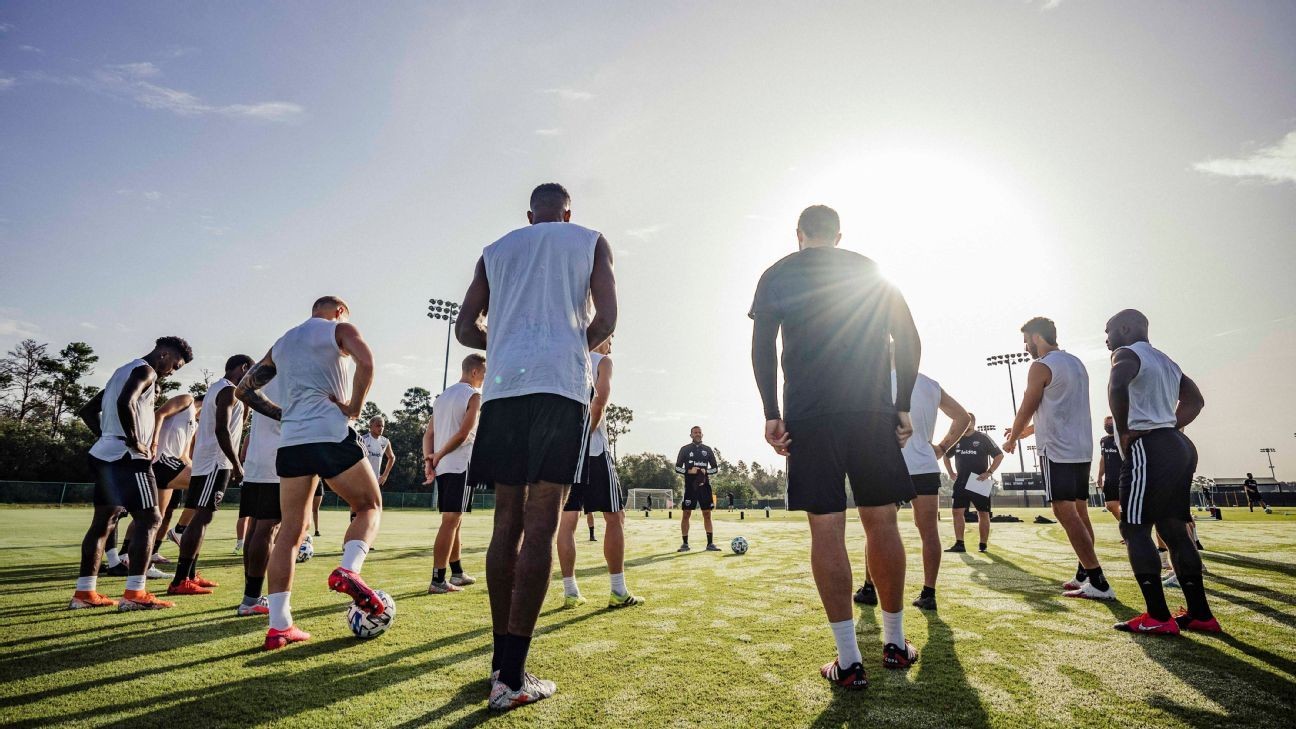 Soccer in the U.S. and Canada is back. Nearly four months after Major League Soccer shut down on March 12 because of the coronavirus pandemic, the MLS is Back Tournament gets underway Wednesday in Orlando, Florida, though it will do so without FC Dallas, which withdrew from the tournament on Monday.

With much of the sporting world turning its attention to the ESPN Wide World of Sports Complex for the next month as the tournament gathers pace, we bring you the group-stage games you can't afford to miss, the players you won't be able to take your eyes off and the storylines you'll want to follow throughout the competition.

Orlando City SC vs. Inter Miami CF | July 8, 8 p.m. ET | ESPN, ESPN Deportes: Soccer's back, baby! When the opening match of the MLS is Back Tournament kicks off, 122 days will have passed since the league's last action: a 3-3 draw between LAFC and the Philadelphia Union on March 8. The game's return is reason enough to tune in, but the first meeting between these two Florida clubs, marking the beginning of what should be a beautiful rivalry, makes it a can't-miss match.

- Stream MLS is Back LIVE on ESPN networks and the ESPN app (U.S. only)
- Carlisle: Why your team will win MLS is Back... and why it will not
- Stream FC Daily on ESPN+

New York City FC vs. Philadelphia Union | July 9, 9 a.m. ET | ESPN, ESPN Deportes: Soccer fans in North America are plenty familiar with the concept of eating breakfast while watching the game they love. But instead of turning on a Premier League match or a Serie A contest, this time the domestic product can join your brunch plans. Put away the beans and tomatoes, fry up some bacon, and grab a dozen donuts because NYCFC vs. Philly stands to be a sweet, mid-morning, mid-Atlantic treat.

Sporting Kansas City vs. Minnesota United FC | July 12, 8 p.m. ET | ESPN, ESPN Deportes: When the league went on hiatus four months ago, Sporting and Minnesota sat first and second in the Western Conference table. Sure, the season was only two games old, but these were two of just four teams to win both their games, and they had the two best goal differentials in the league. The friendliest rivalry in MLS could have major implications for how the playoff race shapes up out west.

Inside MLS is Back: Food pics go viral, how teams are adjusting to 95-degree heatMLS is Back: TV schedule, fixtures and how it works - everything you need to knowHow will MLS, U.S. Soccer, NWSL take action in push for equality?

Montreal Impact vs. Toronto FC | July 15, 8 p.m. ET | TUDN: It won't be the same without the passionate fans of Montreal and Toronto, but whenever these giants of Canadian football meet, it's must-see TV. Their 2016 Eastern Conference final stands as arguably the greatest playoff tie in the league's history, and now that the Impact are led by Thierry Henry as foil to the East champions in three of the past four years, the Canadian Classique should bring plenty of heat to an already-sweltering Orlando.

LAFC vs. LA Galaxy | July 18, 10:30 p.m. ET | ESPN, ESPN Deportes: The fight for the soccer soul of Los Angeles has been waged for only two years, but already El Trafico is arguably the best rivalry in MLS. Some of the star power of years past will be missing from this installment, with Carlos Vela and Jonathan dos Santos absent from the MLS is Back Tournament, but both sides possess plenty of firepower and stardust to make any meeting appointment viewing.

Diego Rossi | Forward | 22 | LAFC: The Uruguay youth international has been the Robin to Vela's Batman, but he'll need to take a starring role with the LAFC captain opting out of the tournament. Last summer, Rossi was heavily linked with a switch to Fiorentina, and with international intrigue in the tournament and scouts continuing to monitor his form, a strong showing in Orlando could be what's needed for Rossi to finally leave Los Angeles for a new home in Europe.

Gonzalo Martinez | Midfielder | 27 | Atlanta United: With Josef Martinez sidelined because of a torn ACL, Atlanta will be leaning on "Pity" Martinez, as well as Ezequiel Barco. The 2018 South American Player of the Year struggled in his first season in MLS, but two assists in the Five Stripes' first two matches of the season suggest that there's more to come in his sophomore season. With Barco riding shotgun, MLS is Back could be just the opportunity "Pity" has been waiting for to show this league what he's capable of.

Javier Hernandez | Forward | 32 | LA Galaxy: Arguably the biggest signing in the league's history, "Chicharito" was held to two shots, zero goals and zero assists in his first two games with the Galaxy. After nearly a decade in Europe, there was bound to be a transition period as the Mexico international returned to North America, but his impact thus far has been underwhelming. Goals and demonstrating better understanding and interplay with the talent around him would make for a positive tournament and, with luck, a promising regular season when it resumes later in the summer.

Rodolfo Pizarro | Forward | 26 | Inter Miami: The Mexico international is the statement signing of perhaps the most glamorous club in MLS history. He scored his side's only goal in two losses in a fledgling 2020 season, suggesting he might be worth the $12 million Miami spent to recruit him from Liga MX giants Monterrey, but David Beckham's team haven't yet surrounded Pizarro with enough talent to make a difference. The likely return of Argentina youth international Julian Carranza should give Pizarro some much-needed help, but Inter will go only as far as Pizarro can take them.

play1:09Can Atlanta win MLS is Back without Josef Martinez?

Herculez Gomez examines whether Atlanta United can cope without Josef Martinez in pursuit of another trophy.

Keeping track of positive tests: As of Monday, there were 13 positive tests for COVID-19. FC Dallas, which had nine players and one coach test positive, had its first match postponed last week before it withdrew from the tournament. On Monday, Nashville SC had its opening match postponed. As more teams arrive at the Walt Disney World Swan and Dolphin hotel, the number of coronavirus cases -- and potentially postponed matches -- likely will continue to grow. How the league reacts to these circumstances will be perhaps the biggest storyline.

How safe is the bubble? Those 13 positive tests in roughly the first week of life in the bubble suggest that contraction occurred in home markets prior to travel, rather than through community spread in Orlando. However, with 17 teams having arrived in the past five days, the truest test of the effectiveness of the league's protocols is yet to come. There are likely to be more positive cases, which might again reflect contraction prior to travel, but with more teams and more inevitable interaction among them, the greater risk is for community spread. As two epidemiologists told ESPN's Jeff Carlisle last week, evidence of that would heighten concerns about player safety.

Can LAFC cope without Vela? Carlos Vela started in 33 of LAFC's 34 matches last season, when they won the Supporters' Shield and earned a league-record 72 points, scoring 36 goals and adding 16 assists. The Black and Gold will be without their talisman for this tournament, with the 31-year-old opting to remain in Los Angeles with his pregnant wife, sources told ESPN's Jeff Carlisle and Tom Marshall, leaving the team's goal-scoring burden on the shoulders of Diego Rossi and Brian Rodriguez. Both have shown more than enough evidence to suggest that together they can pick up the slack left by last season's MVP, but they'll need to consistently raise their game in Orlando if LAFC is to have a deep run in this tournament.