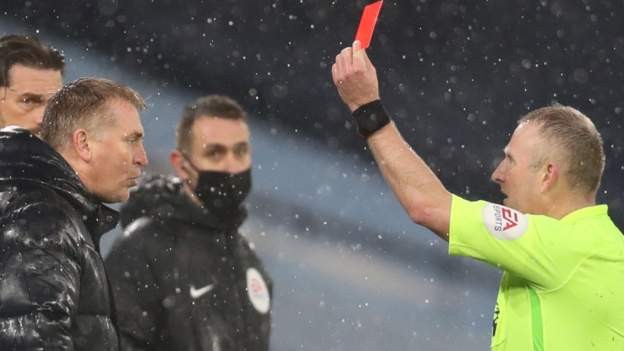 Aston Villa manager Dean Smith will serve a touchline ban in their home Premier League game against Newcastle on Saturday.

Smith, 49, was charged by the Football Association for using abusive and/or insulting language towards a match official after he was sent off in Wednesday's defeat by Manchester City.

"I will reluctantly accept it," said Smith on Friday. "I will accept the charge of insulting the officials. I certainly didn't abuse them and that will be the end of the matter."

On Wednesday, City midfielder Rodri ran back from an offside position to tackle Tyrone Mings and pass to goalscorer Bernardo Silva for City's first goal as they won 2-0 at Etihad Stadium.

After the match Smith described the decision as "farcical" and "pathetic" and added: "I thought they would go over to the VAR (video assistant referee) screen. I saw the incident and saw it was kicking off, so I asked the fourth officials did they get juggling balls for Christmas?"

By the letter of the law, City's goal was legitimate because Mings was deemed to have deliberately played the ball. Subsequently, Rodri was not considered to have gained an advantage.

After accepting the FA charge, Smith said: "I don't really regret it. That's my way of dealing with the situation, a touch of sarcasm."

Villa are 11th in the Premier League and take on a Newcastle side who are 15th and without a win in their past nine matches in all competitions.