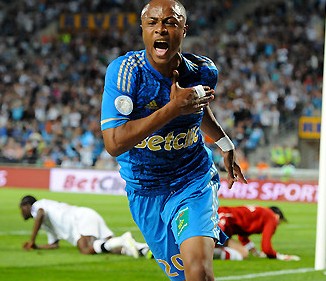 Phew! How time flies, this week, I didnâ€™t need to check the calendar to know which month we are in, the Christmas carols all over the airwaves â€˜remindethâ€™ me.

This year went by so fast like an express train huh? Significantly, December is the month of love, the month of giving, sacrifice, salvation and redemption.

Itâ€™s Christâ€™s birth month; a time when we take stock and evaluate our achievements and disappointments. Itâ€™s that kind of mood that I am in. I have already undertaken some sort of personal evaluation a few times mentally.

Like we have been doing this last quarter, Iâ€™ll be kind enough to let you in on which footballer I reckon had the most influence on the Ghanaian game in the past year 2011. And since we have a habit of sharing, why donâ€™t we share the responsibility. I provide the nominees and you vote for the winner.

Hands outstretched; if you took it, then we have a deal. Sit back, review and then send in your votes.

Ladies and gentleman, here are your nominees:

When on November 6, 2007, he burst onto the football scene aged 17, making a cameo appearance for Marseille in the UEFA Champions League against FC Porto; it could have easily passed as one of those momentary flashes of brilliance.

Subsequent events may have pointed to that fact. At the CAN 2008, He was largely viewed as an undeserved participant who got into the squad on the back of his father, Abedi Peleâ€™s clout. Indeed the tournament rather exposed his immaturity and he came in for a lot of criticism. Back to Marseille he went to build on his fledging career, or so he thought.

Rather, coach Didier Deschamps, who was a playing mate of his father, sent him away on loan to FC Lorient and then further to Arles-Avignon for the 2009/2010. It was at Arles-Avignon that he thrived. His form picked up and he also captained Ghana to African and World U-20 championship titles in 2009. Further impressive performances in the CAN 2010 and World Cup 2010 was enough signal for Deschamps to recall him back to the Marseille team for the 2010/ 2011 season. He has since become a mainstay of the team and has added goal scoring to his tireless work rate.

At the end of last season, he played 45 matches and scored 11 goals for Marseille. This season, he has already made 19 appearances in both Ligue 1 and the UEFA Champions league, scoring 9 goals and helping Marseille to qualify for the Knock out stages of the Champions League. He also played a role in helping Ghana qualify to CAN 2012. When a player â€˜dumpsâ€˜ your country, you could be pardoned if you feel a sense of Â disdain towards him for wounding your pride and honour, you might be tempted to ignore his outstanding efforts for the 2011 calendar year.

But we have to put sentiments aside and evaluate his performance dispassionately.

Kevin in early November, 2011 officially retired from international football citing inability to contain the pressures of combining his national duty with that of AC Milan, the club that butters his daily bread. A romance which started in 2010 came to an end too soon. Having been part of the Portsmouth team that was relegated from the English Premier League to the Championship in 2009/2010 season, Kevin joined the Black Stars for the 2010 World Cup in South Africa. His outstanding performance at the tourney opened a new career path for the heavily tattooed half German.

He joined Milan through Genoa who co-owned him. He impressed on his debut season as he contributed to Milan winning the 2010/2011 Serie A title. He played 34 matches and scored 3 goals.

He has continued this 2011/2012 season in fine form for the Rosoneri, playing 12 matches and scoring 6 goals. The highlights being a hat trick against Lecce and that spectacular goal against Barcelona in the Champions League group match. At a time when local fans cried for bona-fide stars to illuminate and spice up the football scene, one player quietly but steadily emerged and has currently established himself as a genuine contender for the 2011 Ghana Player of the year. Born on December 10, 1990, Mohammed Abdul Basit, captain and playmaker of Berekum Chelsea has been a key figure in the recent successes of the club. His emergence may surprise quiet a number of people but not close watchers of the local game.

Basit began playing in Techiman where he was born and nurtured a passion for the game. That passion took him through Young Goldfields, Hasaacas, Great Olympics and Heart of Lions before finding comfort at Berekum Chelsea.

Playing the conventional No. 10 position, Basit in the past year combined technique, good work rate and an odd eye for goal to contribute immensely to Berekum Chelseaâ€™s successes.

At the end of last season, Basit scored 6 goals while he led Chelsea to a historic annexation of the 2010/2011 Glo Premier League trophy.

He picked up from where he left off last season by playing an instrumental role in the GHALCA G8 tournament which Chelsea won. This season, he has already scored 4 goals in 10 matches and continues to be a pivot for the Berekum club. â€˜I have a confession, donâ€™t take it personalâ€™. That is a line from a famous song by top Nigerian artiste. But indeed I do have a confession. Initially when I drew up the list, I excluded Asamoah Gyan, until my brother nudged me. It was then that I realised that Asamoahâ€™s â€˜renownedâ€™ profligacy in front of goal indeed masks his contributions. If it didnâ€™t, how could I have failed to notice the balanced contributions he made for both club (Sunderland & Al Ain) and country in the past year? But it is a burden â€˜Baby Jetâ€™ has had to carry since he started his professional career with Liberty professionals and the Black Stars.

In 2003, Gyan marked his Black Stars debut at age 17 with a goal against Somalia at the Accra Sports Stadium. He would go on to score several important goals for the Stars including Ghanaâ€™s first world cup goal at the 2006 World Cup against Czech Republic.

27 is the number he has scored in all, but he has also missed a great deal, the most critical being the last gasp penalty miss against Uruguay at the 2010 World Cup quarterfinal.

While he has thrived at National team level, Gyan has been nomadic at club Level. He has played for Modena, Udinese, Rennes, Sunderland and now Al Ain in the UAE.

The loan move from Sunderland to Al-Ain in September 2011 has been severely criticised but Gyan has remained focused and scored 5 goals in 5 appearances. He ended last season with Sunderland by scoring 11 goals though the goals dried up late in the season. He also scored 4 goals for the Black Stars in CAN 2012 qualifiers and friendlies.

The criticisms continue but Gyan continues dancing his way to goals, at least the stats say so. Sometimes people need second chances to fulfil their potential and this couldnâ€™t have been more apt in describing the second coming of Ahmed Toure to Kotoko and the impact he has made in 2011.

Toure famously scored 16 goals in the 2010/2011 league to push Kotoko to second place, win the goal king and the leagueâ€™s Most Valuable Player award.

But who would have thought that Ahmed Toure who was born in Ivory Coast would play for Kotoko, leave in 2008 and return this year to make such an impact. He kept the local scene alive with his a technique, work rate and prolificacy which brought a semblance of excitement.

This season, he has picked up where he left off last season by scoring 6 goals and terrorising defences. Such has been his impact that many have called for a nationality switch in order for him to lead the feeble Black Stars attack. It remains to be seen how long Kotoko can keep him, but until then, Toure just canâ€™t stop scoring.

So you have your nominees and until the winner is announced at a short ceremony on January 7, 2012, you can:

Vote for your favourite nominee by texting either:

Dede, Kevin, Basit, Gyan or Toure to the short code: BP 1736 on all networks (MTN, Airtel, Tigo, Vodafone and Expresso)

Remember the three highest texters would win attractive prizes like Flat screens, Laptops and Mobile phones and other consumer products

What are you waiting for, pick up your phones and vote, I just did.

*Kindly note that one txt message costs 30 Pesewas and the voting platform is powered by M-Tech and the Award competition is supported by 90 Minutes and other media partners.