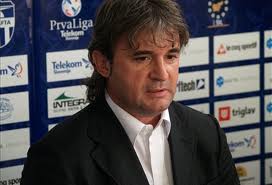 Hearts of Oak will have to pay a compensation package of 42,000 Euros if they sack Nebojsa Vucicevic.

The future of the 50-year-old has been constantly speculated following Hearts.

The Phobians are without a win their last three matches and have fallen nine points behind leaders Asante Kotoko.

Fans have grown impatient with the continual stay of the Serbian trainer and have vowed to oust him from the club.

But the club fear the consequences if the former Hajduk Kula coach is dismissed.

"It's clearly stipulated in our contract signed with the coach that in the event we sack him, we will have to pay him 42,000 Euros as compensation," a top official told the Captivating Ghana Sports Newspaper.

"Obviously because there is no non-performance clause in his contract. Some of us highly disagree but we're being told the coach was not paid any signing on fee.

Two weeks ago some irate supporters chased him from the training ground after their 1-0 League defeat at AshantiGold.