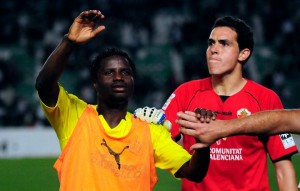 Ghana and Villarreal midfielder Mubarak Wakaso hopes his fortune will change with the arrival of new coach Jose Molina.Â

The midfielder has been consigned to the bench under the management of Juan Carlos Garrido, who was sacked last week.

Wakaso played under Molina, a former Spain international goalkeeper, in the second team of the Yellow Submarines.

"He knows me very well because I was with him in the second team and I'm praying that I get some chance again," the 21-year-old told MTNFootball.com.

"I'm not saying it is automatic. I have to work hard and justify why I deserve to play regularly and I'm ready to do that."

Wakaso made six appearances for Villarreal in the first half of the season in the Uefa Champions League and Spanish La Liga.

If things go as planned, the left-footed midfielder could be handed playing time in the Primera Division clash against Valencia at home on 8 January.

Villarreal lie one place above the relegation mark with goal difference.