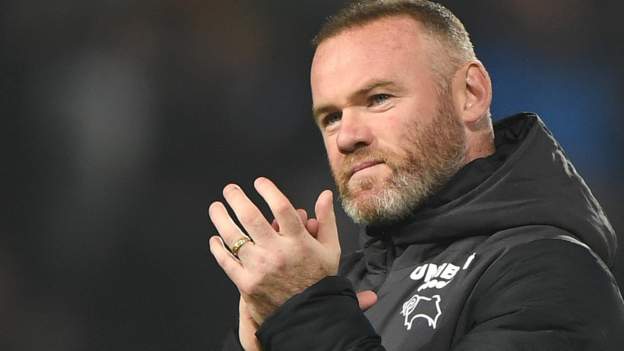 Derby County can survive in the Championship even if hit with a nine-point deduction related to accounting policies, says boss Wayne Rooney.

Speculation continues that the English Football League is to impose such a penalty, with three more points suspended, for historic rule breaches.

It would leave the Rams bottom of the table, with a deficit to make up.

"If nine points is the penalty we have to take then I'm confident we'll stay in this division," Rooney said.

"Obviously like everyone else we're waiting to see what's going to happen and what's going on. If it's nine points then I've got a lot of faith in the players and in myself."

Rooney's side, already hampered in their preparations for this season by a transfer embargo - an offshoot of the off-the-field issues related to the breaches - have picked up seven points from their seven games so far

While free agents such as Phil Jagielka, Ravel Morrison and Sam Baldock have been added to the ranks, the Rams academy has also provided a useful source of talent with Dylan Williams joining alumni such as Louie Sibley, Lee Buchanan and Jack Stretton in the first team.

You have to go back to the mid-1980s for the last time a Rams side were in the third tier of English football, and Rooney remains positive in his quest to avoid that fate.

"I've said many times I'm a confident person," the 35-year-old added. "If we get dealt the nine points there's nothing I can do about it, there's nothing the players can do.

"I'm confident we will stay in the division. If it goes beyond that, with more points, then it becomes a lot more difficult of course.

"My focus is on the players, and getting them right for the games, for which they've been excellent."

Having spent his playing career engaged in winning trophies with Manchester United at the elite level, digging in for survival at the wrong end of the table is a sea-change for the former England skipper - not that he is shirking the scenario.

"My commitment to this club is there for everyone to see, the easy thing would be to walk away," Rooney said.

"I'm a fighter, I'm not doing that, I'm here trying to help this club and I'm fully committed to this football club."