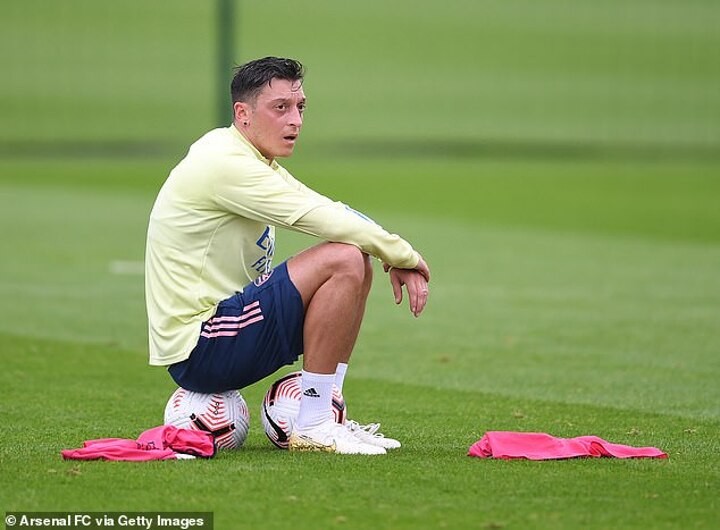 Arsene Wenger has admitted he believes Mesut Ozil's exile from the Arsenal team is 'not based on sporting reasons' with Mikel Arteta deciding to leave him out of his Premier League and Europa League squads.

The 32-year-old, who pockets an eye-watering £350,000 a week, is yet to play a single minute this season and has been frozen out of the first-team until at least January.

Former Arsenal boss Wenger brought Ozil to the club in a £42million deal back in 2013 and has been left bewildered by the midfielder's situation.

Speaking to Sky Sports, Wenger said: ‘I don’t know what’s happening on a daily basis. I just say one thing, the creative players are the players who are perfectionists and they are a bit more sensitive sometimes and they need to be encouraged.

‘Because if I want to play a risky pass I need to be confident and creative players they create this pass that makes the team dangerous.

‘Mesut Ozil is an exceptional football player. What’s happening at the moment between him and the club looks to be more confrontational, it’s not [only] based on sport, I’m convinced.

‘This guy has won things. He’s a world champion, he’s an exceptional football player. ‘Why is he not playing at the moment? I don’t know. When you’re a football player you have to respect the decision of your manager and fight to get your confidence and get back into the team again.

‘He can fight, contrary to what people think, he can fight. And he’s an exceptional football player, he has enough quality to get back into the team. So it’s down to him to get his confidence back.’

Wenger's comments come after ex-team-mate Per Mertersacker suggested Ozil's focus has shifted away from football because he got married and started a family. The World Cup winner tied the knot with wife Amine in July 2019 and welcomed daughter Eda, the couple's first child, in March this year.

Mertersacker said: 'A lot has changed away from the pitch

'He got married, has a family... perhaps his focus has changed. Nevertheless, he is still happy and happy to play football.

'He's the only player I've played with for three teams - Bremen, Arsenal and also Germany. So, I'm very sorry that he's currently in a situation where he's not really used.'

Wenger admitted Ozil would struggle to salvage his Arsenal career and that it may be wise for his former star to prepare for his next move.

He added: 'You practice every day and you make sure that your level doesn’t drop and that you can go somewhere else after and play somewhere else.'

A move to Turkish giants Fenerbache or the MLS has long been on the cards and are expected to be the next destination for Ozil.