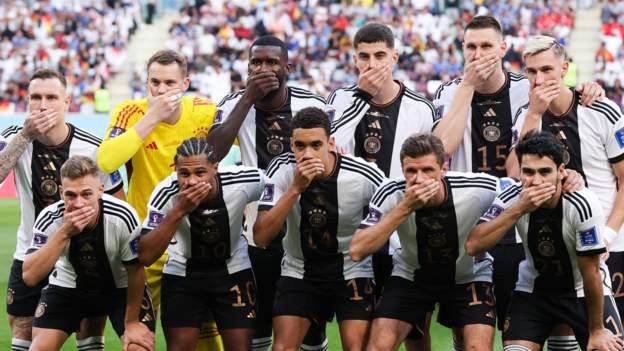 Arsene Wenger has suggested countries that protested at the World Cup saw their on-field performances suffer.

Germany players covered their mouths before their opening defeat against Japan after Fifa threatened "unlimited" sanctions against players who wore the anti-discrimination OneLove armband.

"The teams [who performed well] were mentally ready," Wenger said.

"They had the mindset to focus on the competition and not on political demonstrations."

Former Arsenal manager Wenger, who is Fifa's head of global football development, was speaking at a media briefing on Sunday.

Germany's football federation was the most vocal in pressing for the OneLove armbands to be worn by players and said "extreme blackmail" led to Germany, Denmark, Belgium, Netherlands, Wales, England and Switzerland abandoning plans to wear them.

Protests have taken place against host Qatar's human rights record and its treatment of migrant workers as well as against Qatar's strict anti-LGBT laws.

England, who came through the group stage with two wins and a draw, have taken the knee before each of their games, continuing a trend of carrying out the anti-racism gesture before their matches since the death of George Floyd in 2020.

Four times winners Germany were knocked out of the tournament in the group stage for the second successive World Cup.

Denmark, who finished bottom of Group D, were stopped by Fifa from using training kit with slogans in support for human rights and their kits featured toned down logos.

That came after Qatar World Cup chief Hassan Al-Thawadi said the armbands were sending out a "divisive message".