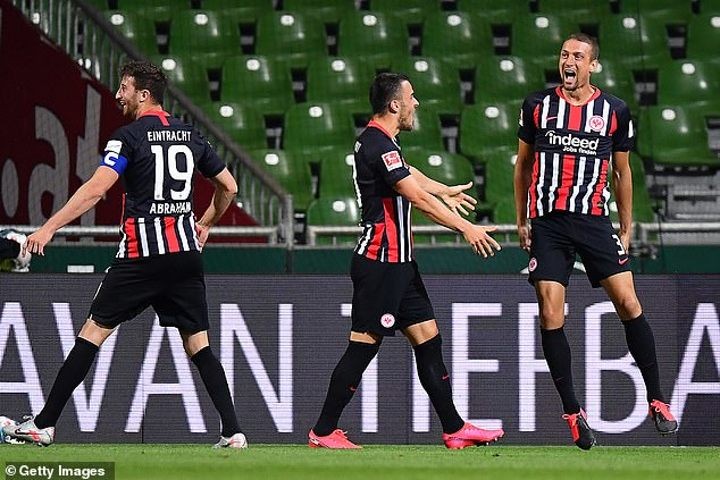 Eintracht Frankfurt substitute Stefan Ilsanker scored twice in 10 minutes to complete a 3-0 win away to Werder Bremen, who stayed in the Bundesliga drop zone on Wednesday as their dismal home record continued.

Forward Andre Silva headed the visitors ahead in the 61st minute of a physical, niggly match, as Ilsanker took advantage of poor marking to turn in the second in the 81st, less than one minute after coming on.

However, the hosts extended their winless league run at the Weserstadion - where they have won only once in the league all season - to 12 matches and stayed 17th, two points adrift of Fortuna Duesseldorf.

Meanwhile, Eintracht climbed to 11th with 35 points, bagging back-to-back wins as the visitors recover from a horrible six-game winless run.

The hosts had the better of the first half as towering striker Davie Selke twice got through, first being denied by goalkeeper Kevin Trapp, secondly by David Abraham's last-ditch stop.

Werder thought they had won a penalty when Abraham handled while challenging Davy Klaassen for the ball but, after a VAR review that took nearly three minutes, officials ruled that the Bremen player was fractionally offside.

Frankfurt took control after the break, had a goal disallowed for offside and went ahead in the next attack.

Makoto Hasebe won possession in midfield and the ball was fed to Filip Kostic whose pinpoint cross from the left was headed home by Silva - the Portugal forward's fourth goal in the five games since the end of the coronavirus stoppage.

Ilsanker needed 19 seconds on the pitch to add the second when he was left alone at a corner and calmly sidefooted the ball in. He was again unmarked when he headed in from a free kick to complete another unhappy evening for Bremen.