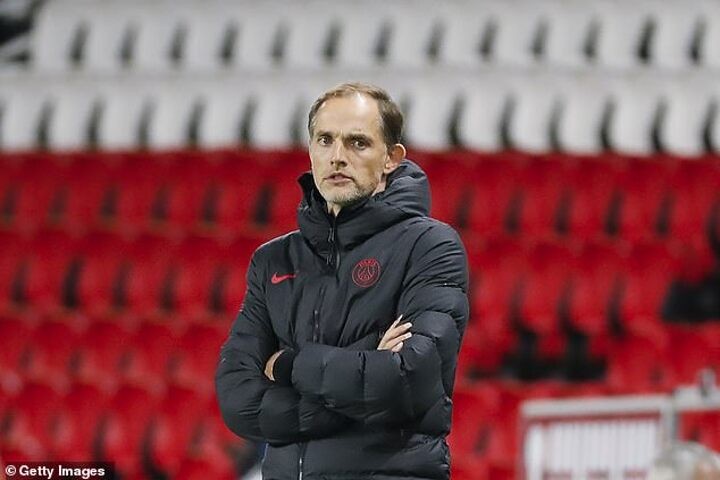 Thomas Tuchel has a number of issues to sort out if he is to hit the ground running as Chelsea's new manager.

The Blues have moved swiftly to replace Frank Lampard after he was sacked on Monday and an agreement with the former Paris Saint-Germain boss is believed to be imminent.

Chelsea are currently sat ninth in the Premier League, having won once in their past five league matches, and their form needs to turn quickly if they are to get back in the race for Champions League football.

Here, Sportsmail highlights the key issues Tuchel is facing in the early stages of his tenure and what he needs to do to turn things around.

Tuchel is used to handling big egos and strong personalities after his years of negotiating the huge characters at PSG but he is about to get his hands on a group of players who are truly divided at Cobham.

Reports in The Telegraph suggested captain Cesar Azpilicueta clashed with out-of-favour team-mate Antonio Rudiger 'on more than one occasion' as tensions flared in recent weeks.

The root of much of the disharmony stems from a bloated squad that Lampard was unable to trim down in the summer transfer window after spending over £200million on new talent.

Players like Rudiger, Marcos Alonso and Jorginho have all had to stay put, even though Lampard wanted them gone, and not much game time has been on offer.

All three are believed to have 'caused issues' for the Chelsea boss prior to his sacking, not exactly helpful when the club have won just two of their previous eight Premier League games.

Azpilicueta as captain 'attempted to ease tensions' between players with academy stars also said to have been upset at their treatment amid claims of favouritism under the now-departed Lampard.

A new manager means a fresh start and Tuchel's arrival could motivate those disgruntled fringe players, who may sense a greater chance to restore themselves to the first-team pictured.

Rudiger and Jorginho, two players Tuchel was very interested in signing for PSG, can expect to be given bigger roles. Alonso still looks likely to leave the club sooner rather than later, with Ben Chilwell and Emerson ahead of him in the pecking order.

The Athletic also reported that Lampard didn't talk to the players who weren't integral to his plans and was 'distant' with them.

Even footballers need their egos stroking at times and after years of trying to keep Neymar in line in Paris, Tuchel will need to take a hands-on approach with his new players.

Get Havertz and Werner's mojos back

Undoubtedly one of the biggest problems Lampard had was his inability to get the best out of both Timo Werner and Kai Havertz.

Both lit up the Bundesliga last season and you simply don't become a bad player overnight.

Werner, who was desperately wanted by Jurgen Klopp and Liverpool, was bought from RB Leipzig for £47.5m while Havertz cost just over £70m after a breakthrough season with Bayer Leverkusen.

But the pair have looked alarmingly short of confidence at Stamford Bridge and offered next to nothing to Lampard's cause. In 35 Premier League games between them, they have contributed just five goals and six assists.

Werner was thought of as the centre forward Chelsea had been missing for years, someone who could use his speed to get beyond defences and give them a more energetic defensive presence when not in possession.

But he has been shifted out to the left wing to accommodate either Tammy Abraham or Olivier Giroud in recent weeks.

Werner has not scored a Premier League goal since November and his woes were compounded in the FA Cup tie against Luton on Sunday when he won and then missed a penalty.

Havertz, who contracted coronavirus last year and didn't have much of a pre-season, has seen his start to life at Stamford Bridge not get going either. He used to be the focal point of attack at Leverkusen but has been used in various positions and roles at Chelsea.

Lampard played him as a No 10, on the right and in midfield as part of a 4-3-3 all in the space of four months. We have not seen his goal-scoring instincts or intricate play around the box enough and he has scored just five goals and added six assists.

That is not a bad rate of production but you expect a lot, lot more for a player that cost £70m.

Tuchel helped develop Ousmane Dembele at Dortmund and brought through a promising batch of youngsters at Mainz. Chelsea fans will be hoping he can kickstart the German duo's Chelsea careers instantly.

Continue to back youngsters

One of the positives of Lampard's tenure was his willingness to look at the club's youth teams and blood the players into senior football. Eight academy players made their senior debut under his leadership.

Mason Mount, Reece James and Abraham have all become first-team regulars in that time while Callum Hudson-Odoi, Fikayo Tomori and Billy Gilmour have all been given opportunties.

Hudson-Odoi probably deserved more game time than he got under Lampard and Tomori has since been loaned out to AC Milan after failing to kick on.

It was reported that Lampard was also considering giving highly-rated prospect Lewis Bate a chance but the axe fell before he could do so.

Some say Lampard had no choice to use the youngsters, given he walked in when the club had just been slapped with a transfer ban by FIFA.

But Mount and Abraham's continued involvement proved he was willing to stick by the kids if they performed. It won plaudits within the fan base and Tuchel would do well to continue that policy.

The Telegraph also claim the club's academy stars were upset at their treatment by more senior players in recent weeks. There have even been allegations of Lampard showing favouritism to those he brought through.

Bate and Tino Anjorin are seen as the most likely to breakthrough next and if Tuchel is able to move on some of the deadweight in his squad then they would offer depth while causing a lot less issues and financial cost.

Giving youngsters a greater role certainly got the fans on side for Lampard. Money may be there for Tuchel but he would do well to look closer to home first.

Settle on a system

Throughout Lampard's time in the job, there was never a feeling that he created a distinctive system or style of play.

There was also a feeling within the dressing room that his constant chopping and changing of personnel and tactics were the reasons why his players could never gather any momentum or confidence.

But after a huge summer outlay on players, Lampard was again unable to fit them all into one style of play.

It seems a 4-2-3-1 was Lampard's preferred choice this time around, but Havertz's failure to shine in that No 10 role saw him revert back to a 4-3-3 in recent weeks.

You could confidently write down the formations and key characteristics of the top teams in the Premier League - Liverpool, Manchester City and even Manchester United now.

But with Chelsea there remains an uncertainty over what system is the best and what players fit best.

In his time at PSG, Tuchel often used a 4-3-3 to get the best out of Neymar and Kylian Mbappe and provide a solid midfield base for them to focus on offensive duties.

The 47-year-old has been coaching in Europe's big leagues for over a decade now, and arrives with a reputation as a master tactician who improves the players he works with.

But time on the training ground is sparse with the congested schedule and Tuchel will need all that experience to lay the foundations of a defined style of play in just a few weeks.

Win the fans round

Sacking Lampard was always going to cause fury from the Chelsea fans, as would any decision to axe a club legend after just 18 months into the job.

As one Chelsea fan wrote for Sportsmail on Monday: 'What a waste of time. What an embarrassment. And most of all, what a disgusting lack of respect to Chelsea's greatest ever player.'

But the club's hierarchy probably thought they could minimise the backlash by getting rid while fans are still locked out of matches. There can be no direct retaliation from fans at Stamford Bridge with no sign of them returning soon.

As Sportsmail reported on Monday, Chelsea fans even intend to keep flying the 'In Frank We Trust' banner at Stamford Bridge that was put up just 24 hours before he was sacked.

While there is certainly a level of frustration, the anger isn't directly towards Tuchel but to the club's hierarchy who showed their inability to give a manager time once again.

Fans - as loyal to Lampard as they are - will feel a whole lot better about his dismissal if their league form turns around and those expensive summer signings start to show the form that won them expensive moves to London.

On the horizon is also a blockbuster game against Jose Mourinho's Tottenham. A win over their London rivals would also give Tuchel some credit in the bank.

Take advantage of favourable fixture list - but beat Tottenham too!

Tuchel will be able to avoid the UK's quarantine rules so he can take training and matches straight away thanks to a special exemption in Covid rules.

Chelsea are hopeful he will be on the touchline for the visit of Wolves on Wednesday night, as long as he returns a negative Covid test on his arrival in the UK.

That is a big boost because, with the games coming thick and fast, Tuchel has no time to waste.

Fortunately the fixtures on the horizon are quite favourable and he will be confident of getting off to a flying start.

After the Wolves game, Burnley visit west London on Sunday. They then face a huge London derby at Tottenham on February 4 before back-to-back games against two teams struggling for form at the moment in Sheffield United and Newcastle.

Sandwiched between those games is a FA Cup fifth-round trip to Championship Barnsley and then Chelsea travel to Southampton - as tough a game as there is in the Premier League at the moment.

Tuchel will need points on the board by then because after the first leg of their Champions League last-16 tie with Atletico Madrid on February 23, Chelsea play Manchester United, Everton and Leeds before the second leg with Atletico.