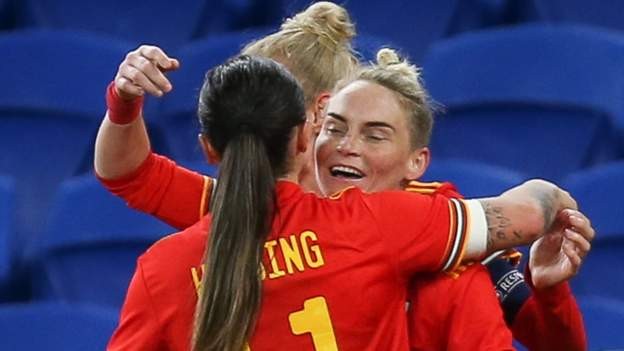 Jess Fishlock, who scored the first goal under Gemma Grainger's management, is Wales' most capped player

Gemma Grainger knew she was in for a tough start to life as Wales manager with two friendlies against sides in the top 15 in the world.

Top-10 ranked Canada were too strong for Wales - as they were for England four days later - in Grainger's first game in charge, before her team deservedly drew 1-1 with a Denmark side ranked 14th in the world.

With World Cup qualification games coming up later in the year, what did we learn from these two friendlies? What was different about Wales? And what did the two games tell us about potential Wales involvement in the Team GB squad at the Olympics?

A new style is clear

The most notable difference about Wales in the two friendly matches was a distinct change in style from how they played under previous manager Jayne Ludlow.

Ludlow's style was very much based around making Wales resolute and hard to beat, best evidenced by their superb defensive record in World Cup qualifying when they went more than 600 minutes without conceding before ultimately losing out to England.

However, possession had never been on the agenda like It is now.

Wales have better strength now than in previous campaigns and with a slightly stronger squad, Grainger seems determined that her team will go toe-to-toe with sides and not be categorised as a team who can only be effective on the counter-attack.

Gone is a system deploying five defenders with Wales shaping up 4-3-3 against Canada and 4-2-3-1 against Denmark, with the latter system seemingly suiting several key squad members.

The shift to four defenders allows Wales' captain and best player Sophie Ingle to play in midfield where she could have more influence and that added protection allowed Angharad James to play more of a box-to-box role.

Jess Fishlock was given more freedom to play higher up the pitch as a number 10, while Rachel Rowe really shone as an attacking left full-back.

As a midfield three, Ingle, James and Fishlock should excite any Wales fan, the potential of that trio is huge, while Ceri Holland has stepped in as a midfielder and as part of a front three and looked impressive straight away.

Finally, Laura O'Sullivan was able to show a completely new side to her with a big responsibility on her passing out from the back. Her kicking was extremely impressive throughout.

"I think for me the focus is about getting the best out of the players and playing to their strengths and I think you are seeing that," Grainger explained.

"These 10 days were about us as a group and it has been a really positive time.

"I want to get these girls doing what they do well and hopefully we are seeing that.

"We've got so many options. We want to find out more in the June camp, but everything is focused on the qualifiers starting in September."

The Wales squad are on-board with the changes introduced by their new boss and are clearly encouraged after their first training camp with her.

It was only two days into camp that Fishlock, Wales' most capped player, described Grainger's start as "phenomenal," and every player put on media duty during the camp seemed equally happy with their new manager.

Fishlock is a fan of the new style Wales are adopting and is also welcoming of the chance to play higher up the pitch with a tandem of Ingle and James behind her.

"We know we can do this, but I think you can see in the way we played we have a new lease of life, we are all super excited and enjoying it," she told BBC Sport Wales.

"I really enjoyed playing higher up the pitch, I haven't done that for Wales for a very long time.

"The three of us have only played together in midfield for Wales, I think, twice and it was fun.

"We are already great without the ball. What Gemma is doing is looking to add to our game with the ball. She has such belief in this and we can feel that.

"In past campaigns we've had hope of qualifying, but this one I think we can get excited about. We can turn hope into belief."

Sophie Ingle is one of four Wales players to reach 100 caps along with Jess Fishlock, Loren Dykes and Chris GunterWales players in contention for Team GB?

With England's form patchy and Wales looking impressive in these friendlies, it underlines further that Wales will be represented at the Olympics this summer as part of the Team GB squad, with the delayed event in Tokyo getting under way in 100 days time.

Ingle and Fishlock, world class players, would be surprising omissions - as Fishlock was in 2012 - and Wales have several other players who will be on the fringes of selection.

Natasha Harding, who offers tactical flexibility and the athleticism to cope with the gruelling schedule, is certainly in contention along with goalkeeper O'Sullivan (especially if three goalkeepers are selected), while injured midfielder Hayley Ladd and James, who has just signed for North Carolina Courage, will also be in contention.