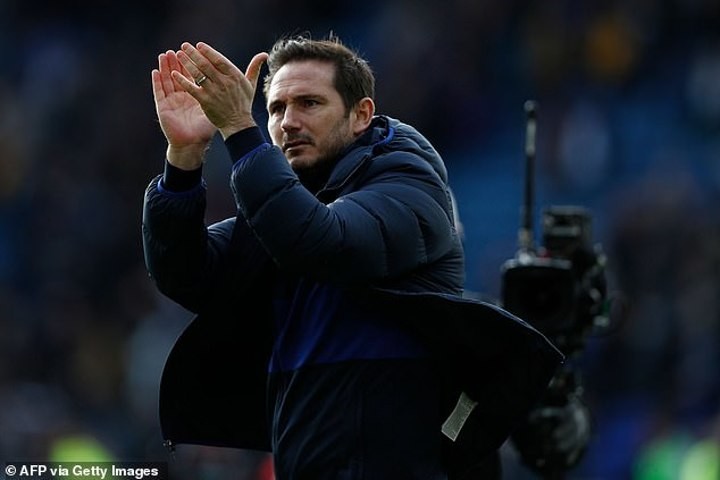 Frank Lampard finally made his first signing as Chelsea manager this week when Ajax star Hakim Ziyech signed on the dotted line ahead of a £37million move this summer.

A FIFA-imposed transfer ban prevented Lampard from changing his squad when he arrived last summer but plenty more business is expected at Stamford Bridge now that ruling has been lifted.

A new goalkeeper, winger and left back are thought to be high on Lampard's wish list so, if he gets what he wants, how Chelsea will line up at the start of next season?

Kepa Arrizabalaga may be the world's most expensive goalkeeper but his performances this season have been far from somebody worthy of that title.

Error after error eventually saw the Spaniard demoted to the bench in recent weeks with deputy Willy Caballero coming into the team. Kepa needs to turn his form around quickly if he is to stay put this summer.

Dean Henderson, who has been impressive on loan at Sheffield United, looks likely to leave parent club Manchester United at the end of the season as he chases a No 1 spot at a European heavyweight.

He would be ideal for Chelsea, given he has Premier League experience and would fit into their structure of recruiting young, English talent.

Last month, James was rewarded for making his Chelsea breakthrough this season with an improved contract that runs until 2025.

With Cesar Azpilicueta entering the twilight years of his career, it seems the Blues have the perfect replacement.

The 20-year-old starred in the Championship with Wigan last season and has built on that by becoming a part of Lampard's first team this term.

James has made 22 appearances this season and would have made more were it not for injury. He is quick, strong in the tackle and capable of providing superb crosses for his team mates to attack.

Lampard probably would have gone and bought a more experienced centre back if he had the chance but now has no reason to panic buy in the summer.

He coached Tomori at Derby last season and obviously saw real potential in him, enough to give him a go at the heart of Chelsea's defence this season.

Tomori has played 21 times and has probably done enough in those appearances to prevent Lampard from splashing out on another defender in the summer.

Rudiger remains the club's best defender and he starts every game when he is fit and healthy.

After missing the best part of four months at the start of the season, Rudiger has not missed a single minute of Premier League action since returning in mid-December.

He showed his ability at the start of the month by keeping Jamie Vardy quiet in a hard-earned draw at Leicester, in which the Germany international also scored a headed brace.

At 26, Rudiger is about to enter his peak years as a defender and should be in the team for the foreseeable future.

Heavily linked with a move to Liverpool before he even made his name in the Leicester first team, Chilwell has delivered on that promise with a superb season for the Foxes.

He has also cemented his place as England's first choice left back and is expected to start for Gareth Southgate's side at Euro 2020 this summer.

Lampard has been stuck between a rock and a hard place this season. He has swapped between Emerson and Marcos Alonso at left back, while Azpilicueta has also switched across to accommodate James at times.

Chilwell offers Lampard a long-term solution to his left back woes but would likely cost upwards of £50m. With Leicester closing in on the Champions League as well it will be interesting to see if Rodgers can convince him to stay in the Midlands.

Kante was the one who perhaps suffered the most during Maurizio Sarri's tenure as Chelsea manager. He rose to the top of world football thanks to his relentless energy and ability to win the ball back.

But the Italian was so determined to play Jorginho at the base of his midfield trio that Kante was nudged further forward, operating in a box-to-box role that he wasn't totally comfortable with.

He has been rotating between the two roles this campaign but, if Jorginho is sold this summer, looks likely to slot back into the base of midfield again next time around.

Kante remains the best in the world at recovering possession and offloading it to a colleague and will undoubtedly thrive if given the chance to do it again next season.

After joining the Blues on loan in 2018, Kovacic made the move permanent last summer and has really impressed. There were doubts after an indifferent season under Sarri but the Croatian has proven there is more to his game.

Kovacic has scored two goals and supplied three assists in 32 appearances this season while he did not find the net and provided just two assists in 51 matches during the 2018-19 campaign.

He traded places with Ross Barkley as the third man in midfield for Sarri last season but has now truly won that battle.

Midfield is an area in which Chelsea aren't being linked with new players. It seems Lampard is more than content with his options in the centre of the pitch.

The 24-year-old was becoming increasingly important for Chelsea towards the back end of last season but then disaster struck.

The England international has been out of action since May after he ruptured the achilles tendon in his left leg playing in a post-season friendly against New England Revolution.

He now looks set to hand Lampard a major boost heading into the final few months of the season, returning to first-team training and playing some friendlies to get himself match fit.

Chelsea are lacking goals from midfield this season and Loftus-Cheek would hopefully bring some much-needed offensive firepower to the team once he's back.

Lampard finally made his first, big statement in the transfer market this week when the Blues completed the £37m signing of the Ajax winger.

Interest in the 26-year old has been there since January but, after seeing a move rejected last month, the Blues continued negotiations amid increasing competition from rival clubs and finally got their man.

Ziyech had a stand out year in 2018-19 that saw Ajax narrowly miss out on the Champions League final. They lost to Tottenham in the semi-final but Ziyech's performances underlined his creative talent.

He was excellent once again during Chelsea's 4-4 draw with Ajax in the Champions League in November. Ziyech will bring a new dimension to Chelsea's attack, cutting in off the right flank to cause havoc for opposition defences.

It seems the battle for Sancho's signature will dominate the agenda this summer with every single one of Europe's elite clubs interested.

The former Manchester City youngster has numerous suitors, both in the Premier League and abroad, but Chelsea could be an ideal destination with the club yet to sign a capable replacement for Eden Hazard.

A native Londoner, Stamford Bridge could be a tempting proposition for Sancho but Dortmund have placed a £100m-plus price tag on the winger.

However, completing such an expensive signing would, you would imagine, restrict deals for Lampard's other targets. But with teams like Liverpool chasing Sancho too, Chelsea's pulling power will be tested to the maximum.

Like Tomori, Abraham was fortunate the club had a transfer ban last summer. Deals for Alvaro Morata, Gonzalo Higuain, Olivier Giroud and Michy Batshuayi had not been successful in Chelsea's pursuit of a Diego Costa replacement.

Abraham returned to the club in the summer after firing Aston Villa back to the Premier League last season and was given a chance to lead the line for his parent club.

He started the season on fire, scoring 10 league goals in 12 matches to lead the Premier League golden boot race. Things have slowed down since then (he now has 15 in 32 appearances) but he has made a strong case to be the club's main man.

Chelsea are still being linked with some Europe's leading strikers though. Lyon's Moussa Dembele and Timo Werner of RB Leipzig are just two names the club are keen on. Abraham needs to get back to scoring goals, sooner rather than later.