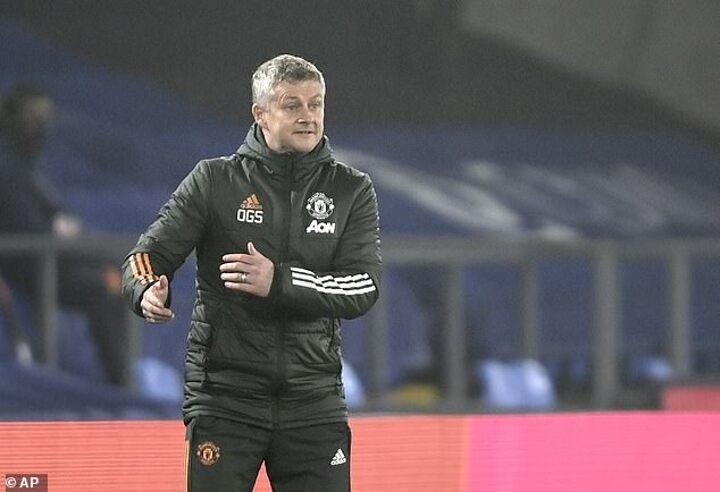 On January 12, Manchester United had just gone top of the Premier League and it looked as though they could mount an unlikely bid for the title.

But just seven weeks later, following Wednesday night's draw with Crystal Palace, they are now 14 points behind Manchester City and are instead facing a fight to secure a top-four finish.

The stalemate at Selhurst Park perfectly encapsulated Ole Gunnar Solskjaer's recent woes. United are not losing games, just one defeat in 10, but they are struggling to win them at the same time and look short of attacking verve and invention.

It was United's sixth goalless draw in the league this season (their seventh in all competitions) and United have now drawn three consecutive matches 0-0 for the first time since Louis van Gaal was in charge in October 2015.

After goalless draws with Real Sociedad, Chelsea and Crystal Palace, they haven't scored a goal in nearly five hours of action.

To make things worse United face a trip to Manchester City on Sunday which will offer a frightening glimpse of just how far United are off their local rivals. Here, Sportsmail looks at what has made them so blunt recently.

Sound the alarm. Fernandes has not scored a goal or provided an assist in three consecutive matches for Manchester United.

That doesn't seem like a major problem but when you've been as clinical in front of goal as he has since arriving from Sporting Lisbon then there is case to be had for calling it a barren run.

Fernandes has scored 34 goals and added 21 assists in 62 appearances for the Red Devils and there is no denying they are reliant on his creativity in the final third.

But have United become so dependent on him that when he has an off day the entire plan just crumbles? That seems to be the case going off the last three games.

It is no surprise that Fernandes looks as though he's starting to feel a bit heavy legged and jaded. His performance levels are bound to drop off at some point.

In a season of relentless games and managers having to rotate players every three or four days, Fernandes has continued to play minute after minute for United.

The midfielder has started all but one game in the Premier League this season and has played 90 minutes in 19 of the 29 games United have played so far.

He also started all but one Champions League group game and played in both of the Europa League games with Real Sociedad, bizarrely captaining the side in the second leg at Old Trafford despite being 4-0 up on aggregate.

But is there a case for Solskjaer giving him more rest?

Surprisingly, United have never lost a game in which Fernandes has started on the bench or been left out since he joined in January 2020.

In fact, they have won eight and drawn one of the nine. When he's started, United average just over two goals per game. Without him that number is higher at 2.4.

So while it may seem United are toothless without their Portuguese playmaker, in reality Solskjaer can relax and give him more time off to ensure he is fit and firing for the business end of the season.

Solskjaer knew he had a problem with his strikers three weeks ago when he demanded they step up and produce more in front of goal.

Fernandes has been carrying the bulk of the attacking load with Rashford, Martial, Greenwood and Cavani all failing to provide a regular source of goals.

Rashford, Greenwood and Cavani started at Selhurst Park but United never looked like scoring. They didn't have many clear cut chances but at the same time didn't look like creating anything for themselves, either.

Martial wasn't involved again. Dropped from the squad completely at Chelsea, even though Cavani was missing through injury, the Frenchman has never been further away from being United's main man.

Rashford's impressive form earlier in the season from the left wing has meant Martial playing in the centre forward position, a role he can play but is not fully comfortable in.

But Martial, who cost United £58million in 2015, enjoyed his most prolific time in front of goal last season, scoring 23 goals and producing nine assists in all competitions but is now out of favour, so his absence is still rather puzzling.

Cavani was brought in over the summer as an experienced head at the top end of the pitch and he looked lively in the early days of his United career.

But the Uruguayan is not going to be a long-term solution, nor does he look capable of hitting 20 plus goals in the seasons he has left at the top of his game.

Greenwood has shown plenty of promise and it's easy to forget how raw he is still is after bursting onto the scene last season. But if United are to challenge for the title then he should't be relied upon as much as he is being now.

The stats of United's attackers make for pretty grim reading. Only Rashford (18) is in double digits for goals scored this season across all competitions and he also leads the chart in assists with nine.

But the goal conversion rate of the four attackers is most troubling. None of them are above 20 per cent with Rashford (19.8 per cent), Martial (11.5 per cent), Cavani (18.9 per cent) and Greenwood (6.6 per cent) all proving wasteful.

All four of them also have a big chance conversion rate below 45 per cent this season, too, and Rashford has the highest goal involvement ratio of 31.8 per cent.

United have been heavily linked with a move for Erling Haaland in the summer and that would be a big help. They need someone who knows how to stick the ball in the back of the net and the Norwegian certainly knows how to do that.

Pogba's relationship with United deteriorated in early December after his agent, Mino Raiola, dropped a bombshell and insisted his time at Old Trafford was 'over'.

Despite that, his form turned a corner in the aftermath and his winner at Fulham in January sent United back to the top of the Premier League and capped off another fine display.

But just as it looked like he was showing signs of the player United thought they had bought from Juventus for £89m in 2016, Pogba picked up a thigh injury that means he has not played since February 6.

One of the most notable differences in Pogba's performances pre-injury was that Solskjaer managed to find a way of fitting him and Fernandes into the same side.

His inclusion in the deeper midfield pairing behind Fernandes brought an additional creative element to the United team.

Pogba was not trusted to play in the two deeper midfield roles in games against the 'Big Six' with Solskjaer preferring to play with two of Scott McTominay, Fred and Nemanja Matic. Pogba was deployed out wide instead.

But in games against teams who are willing to sit deep and soak up pressure, Pogba playing in the centre would pose another headache.

But United have been robbed of that in the last month and now Solskjaer is having to play his more defensively capable midfielders who don't offer as much creativity going forward.

Solskjaer said Pogba is still a 'few weeks' away from a return only a week ago so it looks as though United will be without him for the Manchester derby at least.

Not much depth behind attacking four

It is a problem that Jurgen Klopp has had to contend with in recent seasons at Liverpool and Solskjaer has it too.

On Wednesday night, as the United boss turned to his bench looking for a goal, there were very little options for him to consider.

In terms of attacking threat he only really had Daniel James as a regular first-team player to call upon with Martial missing from the squad completely.

January arrival Amad Diallo was on the bench but is still getting used to English football and can't be expected to make a match-winning intervention just yet and 17-year-old Shola Shoretire has only been training with the first team for a matter of weeks.

Solskjaer's lack of confidence to give either of the promising pair an opportunity was laid bare in his post-match interview when asked why he had left both on the bench.

He said: 'We had Marcus out there, Mason out there, Bruno out there, Scotty came on to give us a goal thrust and he almost had a chance straight away. We put Dan on for some pace.

'With those out there that's most of our goals that we had.

'Of course we had Shola or Amad, but which one of those five would you take off? That was my quandary in the last 10, 15 minutes. I felt Mason, Bruno and Marcus could get a goal.'

But the players he did bring on, Scott McTominay and James, have 23 goals in 180 United appearances between them. Hardly game changers.

Just as United's grip on a guaranteed top-four finish is starting to slip, they have a tough run of games on the horizon to make things worse.

There is no harder game in world football than a trip across Manchester to face City but that is what lies ahead for United on Sunday afternoon.

United then host West Ham, one of the teams in around the Champions League spots with a genuine shot of finishing in the top four, before another home game against Brighton.

Solskjaer's side then travel to north London to take on Tottenham and former boss Jose Mourinho, who will probably think Champions League isn't beyond his side just yet if they can put a run of form together.

United then have a home game against Burnley, always a tough examination for a team's attack particularly if it is already misfiring, and then an away game at northern rivals Leeds.

At the start of May, United then host Liverpool at Old Trafford, which could be season-defining for both teams.

Klopp's team will be chasing all the points they can get by then as they try to end their awful season on a high by qualifying for the Champions League.