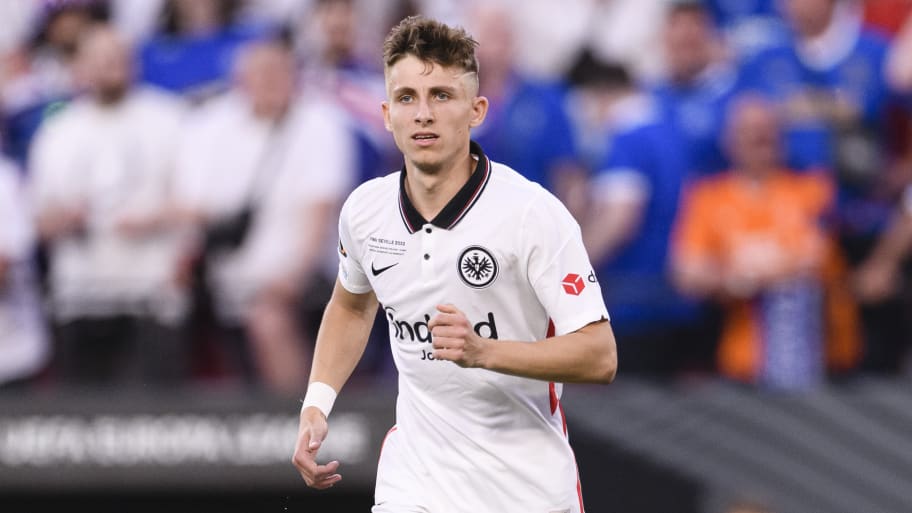 Eintracht Frankfurt's Jesper Lindstrom, one of the rising stars of the Bundesliga, is starting to catch the eye across Europe.

Reports in Germany have suggested that the 22-year-old, who is an attacking midfielder also capable of playing on either wing, is now on the radar of Arsenal and could be set for a January switch to the Premier League if he continues his impressive form.

Here's all you need to know about Lindstrom.

Lindstrom, more commonly known as Jobbe, joined the Brondby academy at Under-13 level and made his debut for the club in November 2018, aged 18. He enjoyed two excellent campaigns following that, racking up 15 goals and 15 assists in 65 games.

A number of sides were interested in signing Lindstrom in the summer of 2021 but it was Frankfurt who won the race for his signature, striking a deal worth around €7m.

His debut season in the Bundesliga yielded five goals and five assists in 29 appearances, earning himself the league's Rookie of the Year award at the end of last season.

At international level, Lindstrom made his Denmark debut in November 2020 and has five caps to his name, although he is yet to cement a permanent place in the squad.

Lindstrom's reputation has been built on electric dribbling and tidy footwork. He is excellent at beating defenders, using either a tricky touch or a clever use of his body to mesmerise opponents and create space.

These moves allow him to create a high number of chances for his teammates, but so do his clever passes. Lindstrom loves using the outside of his boot to make the most of awkward angles and isn't scared of attempting deft flicks to create opportunities out of nothing.

During his time with Brondby, Lindstrom also proved himself as a real threat from range, firing home a number of goals from outside the box.

Since moving to the Bundesliga, Lindstrom's shooting accuracy hasn't always been the best. When he gets his shots on target, they are usually excellent, but scouts have highlighted concerns about his inconsistency in front of goal.

Lindstrom has also confessed that he has struggled to match the speed and physicality of high-level competition, but he told Hessenschau about his work in the gym to address that.

"It also makes a big mental difference for me that I can now use my body more and I'm not afraid of the duels," he said, earning himself the nickname 'Muscle Kid' from Frankfurt teammate Kevin Trapp.

This one's a mystery. Simply put, nobody really knows Lindstrom's best position, and it's for this reason that comparisons to another ex-Bundesliga star, Kai Havertz of Chelsea, are very easy to understand.

Predominantly an attacking midfielder, Lindstrom has played everywhere in the final third, with his versatility an integral part of his skill set.

"In general I like to play up front but can also play on the wings," Lindstrom said of his best position. "I’ve got a strong shot on me from distance and I like to link up play in the penalty area."

A fan of English football growing up, Lindstrom confessed to Bild that he was fascinated by Steven Gerrard's style of play on the pitch.

"As a child, I loved Steven Gerrard," he said. "He wasn't the same type of player as me, but I like him as a person. He was a leader who always cared about everyone - someone who hugged the young players and stood by their side."

However, he conceded that the flair of someone like Neymar caught his eye as well.

"When I got older, Neymar came along. Like everyone else, his tricks, his pace, the goals... they were just incredible for me," Lindstrom added. "If you could combine [Gerrard and Neymar], it would be perfect."

An ambitious personality, Lindstrom has repeatedly discussed his desire to win the Champions League and he has never shied away from the possibility of switching clubs to facilitate his dream.

Before last season's Europa League final, Lindstrom told B.T: "[A transfer] is something I've thought about because things have been going so well, but you have to consider if things are going too fast.

"To me, it's about what kind of interest there is, because if we're talking about a club that is not better than what I'm already a part of, then it's not something I'll consider. I'm not in a hurry, I could maybe use another year in Frankfurt before I move on.

"But it's difficult, because if you get the right offer, you have to say yes."

This article was originally published on 90min as Who is Jesper Lindstrom? Things to know about the versatile Denmark forward.