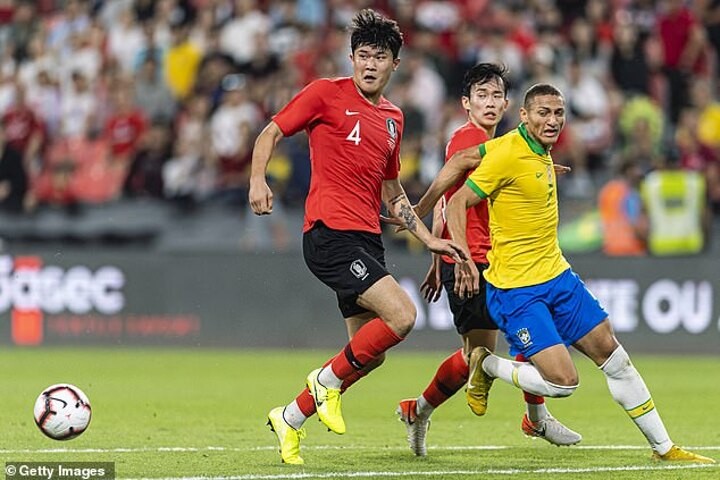 If reports emerging from within South Korean football are to be believed, Chelsea or Tottenham could soon be set to acquire Asia's next big talent.

Kim Min-jae has quietly been going about his business and making huge strides both domestically and with the national team.

After moving from Jeonbuk Hyundai Motors to Beijing Guoan in 2019 Kim's football has seen exponential growth, with Premier League rivals Chelsea and Spurs now vying for his signature to bolster their defensive lines.

Sportsmail takes a deeper look into the style and qualities of the 24-year-old, who is tipped to become a highly sought after commodity in the transfer window.

Born to parents who were both track athletes, Kim certainly has a sporting pedigree.

Watching the central defender both in and out of possession, it becomes clear he has both a robust fitness and the physical stamina to remain dominant throughout a match.

For both club and country Kim is responsible for marshaling the back line and pushing his fellow defenders either deeper or higher up the pitch.

In this sense Kim sets the tempo at the back, and does so with a surprising maturity given his younger years.

Being such a raw athlete certainly contributes to Kim's all-round game, and allows his many other sporting characteristics to shine through as a result.

At 6ft 4in Kim is a physically imposing specimen and looms over his opponents in the penalty area.

A distinct advantage in both attacking and defensive situations, Kim's presence can often be unnerving and has on previous occasion provoked reckless errors from rival sides.

The South Korean utilises his height advantage perfectly, and is a formidable competitor in the air.

Despite his career still being in its blooming stage, Kim already has a fine highlights reel of powerful headers, thudded into the back of the net with aplomb.

The 24-year-old is no slouch on the pitch and this quickly becomes apparent in the early stages of games. A 'Monster' of both physicality and endurance.

Historically centre backs have never been regarded for speed, or were specifically required to possess this quality.

It is only in recent years that the position has been revolutionised and the expectancy levels have gone through the roof.

Previously a solid centre half need only be strong, durable and possess a reassuring understanding and reading of the game.

Now, with the likes of Liverpool's Virgil van Dijk and Real Madrid's Raphael Varane redefining the role and stepping up the demands, top central defenders are now also expected to provide an electric turn of pace.

Chelsea and Spurs fans will be reassured to know that Kim has this desired trait in abundance.

Though it would usually be seen as an obstacle when it comes to a foot-race, his height and wide frame more often than not become an advantage.

Kim is quick off the mark and rarely loses out to a striker when it comes to getting first to a loose ball, with his tall stature then allowing him to easily shield possession and wait for reinforcements, or play it out from the back.

That said, it will be very interesting to note if this still applies should Kim come up against some of the speed demons of Premier League and European football.

Footage of Kim during a Beijing Guoan match went viral last season, after the tall defender gave a brief masterclass in the art of composure.

With his side holding a slender lead, Kim found himself under a heavy press from rival attackers attempting to squeeze out mistakes.

After being passed the ball in a tight situation, Kim was immediately on the back foot with a striker less than three yards away and sprinting with full momentum.

What happened next was a small slice of magic.

Quickly surveying his options in the milliseconds afforded to him, Kim could be seen glancing upfield  before quickly deploying a subtle drop of the shoulder.

This permitted the striker to commit to the challenge with legs splayed, allowing Kim to neatly slip the ball between to pull of the nutmeg and immediately relieve the pressure.

The 24-year-old was then able to look up again at the long-ball pass he had initially identified, before executing it at his own pace. Coolness personified.

An interesting situation could soon unfold, where we see Jose Mourinho go up against his former student Frank Lampard in trying to lure Kim to London.

Both managers can make convincing cases for the South Korean to make the move, while both have the allure of offering the star a London lifestyle.

Mourinho, however, has a trump card he will undoubtedly use.

The opportunity to link up with Son Heung-min will be extremely tempting for Kim, and this will not be lost on the Spurs boss.

Son is revered in the homeland, and is without question the biggest sports star across the whole of Asia.

Kim and his South Korean team-mates all look up to Son on the international stage, and the chance to play with his compatriot on a daily basis would both ease his transition into the rigours of English football, while also elevating his football status back home tenfold.

Picking between Chelsea and Spurs would be no easy situation, depending of course on whether both sides go concrete with their reported interest.

Given his trajectory in the last year, it would be no surprise to see other teams enter the picture and offer Kim the alternative of a different European league.

One thing is for certain though, 'the Monster' will really have to live up to his nickname if he is to flourish in Premier League football, and quickly.