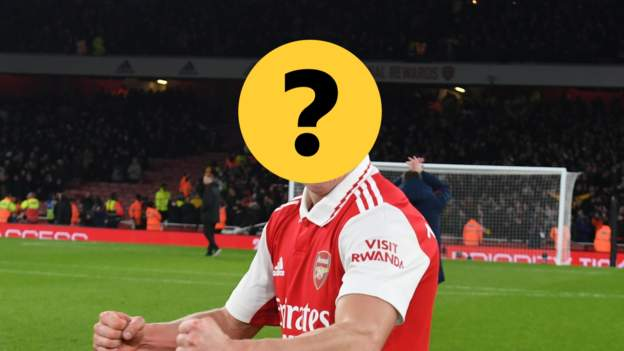 At the end of every Premier League round of fixtures, BBC football pundit Garth Crooks is on hand to give you his Team of the Week.

But who has he picked this time? Take a look and then pick your own team below. As ever, Garth also has his say on the game's big talking points in the Crooks of the Matter.

Visit your Premier League's club page with all the best content

For the second consecutive week, I find myself compelled to select Emiliano Martinez as my number one keeper. The Argentina international has been playing out of his skin since his return from a successful World Cup. He was outstanding against Leeds and ensured Villa got another three points away at Southampton.

I also notice that Unai Emery has made Martinez his captain. It would appear that the extra responsibility bestowed upon the World Cup winner by his manager has inspired even more confidence. Martinez is also starting to appear very comfortable with the ball at his feet and looks more like a footballer rather than a goalkeeper these days. I just hope he doesn't get carried away and make the same mistake as a lot of goalkeepers who suddenly think they can play.

Newcastle United have had an amazing run these past few weeks and really should have won at Crystal Palace when you consider the chances they had. One of the reasons Eddie Howe's new-look team didn't snatch all three points was because of the performance of the Eagles' central defender Chris Richards.

For a fee of £10m from Bayern Munich, the United States international looks a good buy on his past two showings. He was equally impressive against Manchester United in midweek and has given Patrick Vieira's team a real boost in defence.

Newcastle goalkeeper Nick Pope deserves a mention at this point. The England international's performances have been head and shoulders above those of Everton's Jordan Pickford. His one and only save against Crystal Palace and his extraordinary run of clean sheets proves it.

Oleksandr Zinchenko had an injury-hit start to his Arsenal career after arriving from Manchester City, but he is in red-hot form right now.

He was involved in both goals scored by Eddie Nketiah against Manchester United, while the ball round the corner for Granit Xhaka to play Martin Odegaard in was just delightful.

Arsenal haven't had a left-back this effective since the days of Ashley Cole. Zinchenko has played a massive part in the transformation of Mikel Arteta's team. Pep Guardiola let the Ukraine defender go to Arsenal and may have let the Premier League title go with him.

Chelsea should have wrapped up their game against Liverpool in the first half of what really was quite a drab goalless draw.

Graham Potter's side are sporting a number of new imports, of which Mykhailo Mudryk is one.

The Ukraine international was quick, had two good feet, had awareness but didn't look too great in front of goal. I hope for Chelsea's sake he's not another Timo Werner, who had all the makings of an excellent striker but couldn't finish.

Club owner Todd Boehly, in his attempt to make an impact on the English game, needs to careful not to allow his club to become known as 'webuyanyone.com'. Fortunately, the Blues have Thiago Silva playing at the back for them and at the tender age of 38 still looks imperious. The best teams are carefully crafted, not bought.

In their current circumstances, this was a very important three points for Tottenham at Fulham. Having lost at home to Aston Villa, then suffered the humiliation of being well and truly trounced by their north London rivals, Spurs needed a result against Fulham at Craven Cottage - and a clean sheet even more.

The fact that they got both illustrated some of the character that was absent in previous fixtures. One player with bundles of bottle is Romero. The Argentine World Cup winner has the sort of bite to his game strikers hate. He left his mark on Aleksandar Mitrovic on a couple of occasions and provided the Tottenham defence with steel and class in equal measure.

If you've only scored one goal in your past five away Premier League games and you find yourself 2-0 down after just 40 minutes it's fair to assume you've got a problem. Everton have some serious problems both on and off the pitch and Jarrod Bowen's goalscoring instincts for West Ham have just jettisoned Frank Lampard from his job and catapulted the Toffees into more turmoil.

If Everton are to survive this season, their fans will have a massive part to play. They can start by getting rid of banners insisting on the removal of their board executives, making Goodison Park a special place for their team to play again, and a stadium visiting teams fear. That's what special fans do.

I've spent the past two weeks singing Luke Shaw's praises as a centre-back. He moves to his favoured position and the full-back gets torn to pieces by Bukayo Saka. Why Shaw never insisted he got some help from Scott McTominay, I will never know. Saka was in terrific form and made United pay for Shaw's defensive shortcomings.

Playing centre-back is certainly very different from playing as a full-back. First of all, you're isolated, and if you cannot handle your winger, you're exposed. At the end of the game, Shaw looked like he had been put through the wringer.

He was outstanding against Spurs and still didn't make my team of the week. Thomas Partey didn't have his best game for Arsenal against Manchester United but he was as solid as a rock. The Ghana international has arguably been Arsenal's most consistent player this season.

There have been plenty of star performers among the league leaders' ranks but few have performed as consistently as Partey. The biggest challenge facing Mikel Arteta now is: Can he keep his most important players free from injury?

He can't control what goes on in matches but he can regulate what goes on in training. If the Gunners can manage their resources as well as they have managed their performances, then they are in for one hell of a finish to what is already a tremendous title race.

Manchester City beating Wolves at home is nothing less than I expect. Neither is Erling Haaland scoring a hat-trick in the same game. While that comment might appear dismissive, the reality is anything less from City attracts immediate criticism of a team who are expected to win the title.

The Carabao Cup was a distraction, if the truth be told. The Champions League is a priority and City are in the knockout stages once again in a competition they have never won. So consecutive victories against Spurs and Wolves have demonstrated that their defeat against Manchester United in the derby was a blip and they still have their sights firmly fixed on the title and the Champions League. Haaland holds the key to both.

I honestly thought that the loss of Gabriel Jesus to injury would have a devastating effect on Arsenal's title chances. I couldn't have been further from the truth. Jesus was in sparkling form before he got injured at the World Cup but from the day Eddie Nketiah came into the Arsenal team to deputise for Jesus, he has been in blistering goalscoring form.

His goals-per-game ratio has been off the chart. The striker has scored seven goals in his past seven games and would have added to that tally had it not been for some brilliant goalkeeping by David de Gea on Sunday. What Arteta does when Jesus is fit is anyone's guess but if he were to play 4-4-2 with Jesus and Nketiah up front as a partnership, it's game over.

This is a difficult time for Tottenham Hotspur and in particular Harry Kane. Spurs are being eclipsed by their north London rivals, while speculation surrounds the England captain about a possible departure to Manchester United.

None of that, however, seemed to bother him against Fulham. His goal was of the highest quality as he left Tim Ream on the turn treading water before smashing the ball past a stranded Bernd Leno.

If Kane were to leave Tottenham for Old Trafford, it would cause a major storm and put the ownership of the club under pressure and the manager's position in doubt. Read more about my thoughts on the relationship between the manager and his board members at Spurs in the Crooks of the Matter below.

Antonio Conte said after the defeat against Manchester City that he thinks his Tottenham team are not ready to be at the top. He's been in the job for the best part of 18 months and he's only getting that now?

He went on to say that he feels somewhat isolated and that he is the only one having to explain the difficulties he was experiencing managing Spurs. Who else is he expecting to explain his decisions? Does he expect Daniel Levy to leave the boardroom and conduct the post-match interview and defend Conte's managerial selections?

I don't know how much Spurs are paying the Italian but it will be a princely sum to pick the team, manage fans' expectations and explain to the media why his team are leaking goals.

While I have been a great admirer of Conte, the Italian seems to be a shadow of the man that lifted the Premier League title with Chelsea in 2017. Tottenham players appear not to be responding to his methods as they did when he first arrived.

Furthermore, his judgement has been called into question. Hugo Lloris should have been replaced months ago while the selection of 20-year-old Pape Matar Sarr for his first north London derby against Martin Odegaard, Thomas Partey and Granit Xhaka beggared belief.

I fear Conte may have given up and I wouldn't be surprised in the least if he eventually walks.