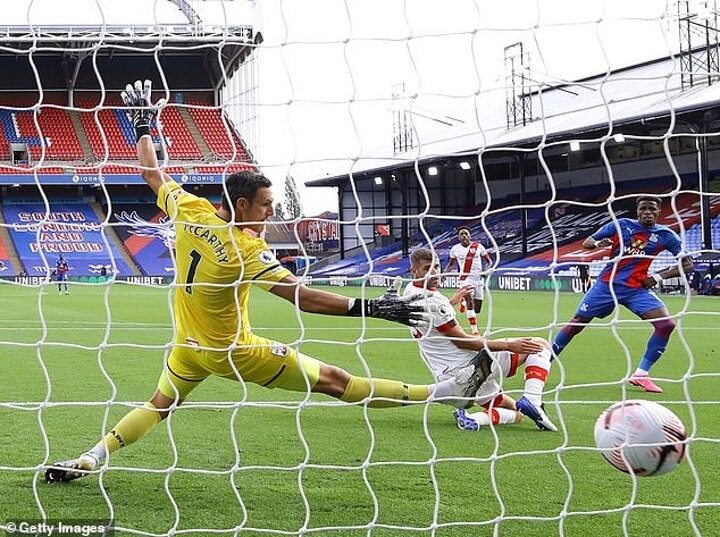 There is something about this Premier League season we're experiencing which feels very raw and combative.

In these pandemic-stricken times the world of football certainly feels very strange indeed, but week upon week we have seen the back of the net rippling non-stop. A seemingly instinctive spate of goals galore.

Goals have been an ever-present. Match by match goalkeepers have been beaten over and over again, as the top flight embarks on a scoring spree which is well on course to break the existing record.

At present 61 Premier League games have passed without a goalless draw occurring, which is just 14 shy of the existing record set 26 years ago.

Between September 18th and November 2nd 1994, there were 75 Premier League games without a 0-0 stalemate, and football stands on the brink of shattering this once more.

But why is this happening? What are the factors in play which are causing a glut of goals and rapidly seeing this season become one of goalkeeper's nightmares? Sportsmail investigates.

Teams had little option but to get straight back on the horse this season and head right out of the blocks into another campaign.

Pre-season can often be moaned about, given teams jet off around the world and seem to engage in numerous menial fixtures while putting out line-ups that few people recognise.

Yet this year we are truly seeing the importance of pre-season. The time for slow crafting and fine-tuning.

With minimal preparation, many teams have headed immediately back into the pressure cooker of Premier League action and are playing with pure instinct as a result.

Mistakes are occurring and the goals are going in. In turn, teams are reverting to a gung-ho approach of simply trying to outscore their opponent rather than fall back into the methodical and well-versed methods which would have been neatly stitched together during a full and sustained pre-season.

A unique situation is meeting teams now whereby the work of pre-season is still being implemented as the campaign itself goes on.

Many top flight managers have already admitted that training sessions have taken a huge shake-up this season, in order to accommodate for a season unlike any others.

For as long as this uncertainty continues, it's highly likely the goals will continue to seep in.

It seems obvious to say, but the omission of supporters really is biting football.

They are the lifeblood of the game and it really isn't just some tired old cliche.

Not only are teams having to face each other cold - in terms of preparation - but they must also do this without the engine of the so-named '12th man.'

When football returned from its postponement at the tail end of last season, many players immediately noted how alien it felt to be playing with a total absence of fans.

For the average Premier League footballer, it has been the best part of a career since they last regularly turned out in empty stadiums, where the thumping of tackles reverberate across all four corners.

When game-plans don't go a certain team's way, they can more often than not rely upon the fanbase for stability, as a guidance tool to get them through what remains of the 90 arduous minutes plus stoppage time.

From Liverpool at Anfield to Crystal Palace at Selhurst Park, teams lean on their fans and hope the opposition get drowned in the noise.

Now, the game has become a whole lot more lonelier.

When the lack of pre-season planning begins to bite and methodologies fail, the 11 men on the pitch have only one another to look to.

It is no coincidence that Jurgen Klopp's rampant Liverpool lost so badly at Villa Park. Dean Smith's side had their number, and the Reds looked to what would have been a fervent away end... only to see empty seats staring back.

In the same match last season, Liverpool rallied in stoppage time to score two last-gasp goals and clinch a comeback victory, all while their travelling supporters almost broke the sound barrier.

Fans are vital to this game and, as it now clearly appears, vital to goals as well.

And this is even before we observe the manic state of the fixtures list.

Enduring an unprecedented pandemic was naturally always going to have seismic repercussions, but this season teams are having to combat games more rapidly than ever before.

Football is operating in unknown territory and added to the melting pot is the need to play just as many games as ever before in a more limited time frame.

It is, of course, a potential recipe for disaster.

The season is only in its infancy and already we have seen matches piling up with minimal rest.

With domestic and European cup competitions overlapping themselves with the immovable object that is the Premier League, teams are being asked for more than ever.

Taking Jose Mourinho's Tottenham for example, Spurs were served a possible run of nine games in 22 days during September, prompting defender Eric Dier to verbally lash out over a perceived lack of regard for player welfare.

We are now looking at a top flight situation where teams are being asked to take back to the pitch every couple of days, having had little pre-season and still struggling with fluctuating fitness levels.

The international break has brought some sanctuary for those not involved, yet players called up for their country find their personal struggles entirely accentuated.

Prior to the Merseyside derby Jurgen Klopp let his groans be known, after a selection of his South American stars were required to make a long-haul flight in the midst of an upsurge in coronavirus infections, to play a match in Peru and then return to Premier League action mere days later.

Many agree this is not sustainable and, as the season gathers pace, expect this to become a very sensitive talking point.

The wicked world of VAR

After making quite a name for itself last season, the Video Assistant Referee system has hit brand new heights already.

What this season of all seasons could do without is controversy. Yet week upon week hair is being torn from the scalps of furious supporters who cannot quite believe what they're seeing.

It has already been established that teams are not at their sharpest this season, and have myriad pressures stacking up against them.

So it seems only natural that mistakes are being made. Unfortunately, the eagle-eyed and oh so questionable VAR is having a say on a weekly basis.

With the summer revamp of VAR, decisions have been made ever more stricter in an attempt to simplify the ruling.

Handball now refers to the entire arm when coming into contact with the ball in the area, while the margins for offside really aren't worth getting into.

A quickly emerging trend can be seen with the spate of penalties already being awarded this season.

VAR has been an influential factor behind many teams hitting the back of the net from 12 yards, and this is all set to continue for the remainder of the campaign.

Taking a look at the average Expected Goals (xG) for a Premier League season, the current rate at which balls are flying in the back of the net exceeds the usual 50.6 level.

This could point to a number of factors, most of which are aforementioned.

Teams are struggling, but there may also be cause to enquire whether goalkeepers specifically are finding this season tougher than most.

Keepers haven't been helped with the influx of VAR-awarded penalties raining down on them, though higher tactical lines played across the top flight this season may have bearing.

In order to address the issues of a shorter summer preparation time, it has been common this season to observe teams playing much higher up the pitch, in order to win and retain possession from the off.

On the surface this appears to make plenty of sense. It is indeed easier to dictate a football game when the team in question has the lion's share of possession.

Yet this can have rather adverse effects if done incorrectly. Manchester United paid the price in brutal fashion recently against Tottenham, when Mourinho's side exploited a high line at Old Trafford to devastating effect.

Just like Liverpool, who crumbled at Villa on the same day, both matches quickly became reminiscent of Sunday league, where one pass was enough to bring down an entire back line and see the goalkeeper peppered from all angles as a result.

The tactical move does work as well, naturally, but comes at a risk. Marcelo Bielsa's Leeds United have made a bright start to their return to the top flight, though their use of one of the highest lines in the division has seen them concede eight goals so far.

How does this end?

Football right now is a bit like a new pair of shoes. It doesn't fit too comfortably and things feel a bit off.

It was much the same when the action resumed at the end of last season, though the teething issues still remain.

The advantage back then however, for all teams, was an already established rhythm and routine of a Premier League season which had been only briefly curtailed.

This time around football finds itself disjointed from the off. 'The new normal' is a tired phrase used a little too often at the moment, but it does sum up the top flight as we currently see it.

It's a safe guess to say that a levelling point will occur, though with teams still some way off playing themselves into a full working rhythm, VAR awarding the slightest of tremors and fixtures coming in thick and fast... goals don't look like they will be drying up any time soon.