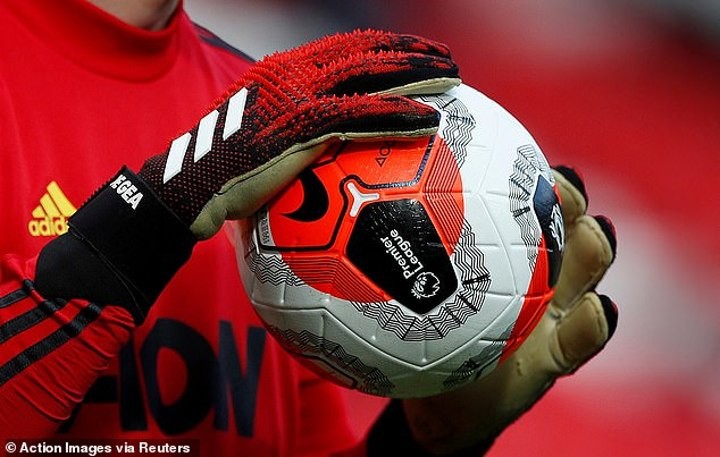 The House Of Cards atop English football could collapse as financial lifeboats threaten to desert Premier League clubs during the coronavirus pandemic.

That is the stark warning from experts, one of whom compared the crisis to the financial crash, when the US housing market sleepwalked into ruin because it was considered too secure to fail.

Now Premier League sides are accused of relying on TV money in the belief it would never come under threat. 'Well, guess what? Here we are,' one expert said.

Premier League chief Richard Masters has warned the division could lose £1billion due to the pandemic. Burnley chairman Mike Garlick, who runs one the division's tightest ships, has warned they could run out of money in August. For others, D-Day could come even earlier.

All it needed was a catalyst. Despite 'record-breaking' revenues, 'clubs had already placed themselves in the worst possible position for an event like this'. One Premier League side spent 78 per cent of their turnover in 2017-18 just on wages.

Income is drying up but outgoings continue, the largest of which is player salaries.

There is still no agreement between Premier League clubs and players about wage cuts or deferrals. PFA chief Gordon Taylor is arguing against blanket deferrals. Given salaries make up around 60 per cent of all outgoings in the division – and at Crystal Palace in 2017-18, 78 per cent of all turnover – this is becoming a serious problem.

One banking industry insider said football clubs 'make no sense' from a financial perspective. They had been warned.

'(In) the very first report we issued at the end of 2016... we made one point,' said John Purcell of vysyble. 'Football clubs are too reliant on TV money.'

As rights fees continued to rise, their verdict didn't go down well. 'Everybody thought it was a safe bet, very much like the US housing market at the end of 2007: it could not possibly happen. Well, guess what? Here we are.'

Across the Premier League, TV rights were worth £2.45billion in 2018-19. Over the last three-year cycle, the lowest payment to a club for one season was £93.4million.

But streaming service DAZN have asked to defer payments during the current shutdown. If this trend continues the situation could become 'very dangerous,' Kieran Maguire, a lecturer on football finance at the University of Liverpool says.

Should the season be cancelled, clubs face a potential repayment of up to £762million.

And despite 2018-19 being the last year of the most lucrative TV deal ever, vysyble say 'data for Premier League and Championship clubs suggest a combined and record-breaking economic loss of almost £1bn.'

Purcell added: 'No one could have foreseen an event as catastrophic as Covid-19 but... the clubs had already placed themselves in the worst possible position.'

According to vysyble, TV money accounts for 38 per cent of Manchester United's revenue. At Watford it's 83 per cent. For Bournemouth, Maguire says, the situation is even more worrying.

'They are almost wholly reliant on Premier League TV income, it's about 88 per cent of their total income,' he said.

'If the next instalment fails to materialise they are in a perfect storm of money due in and money going out.' Bournemouth manager Eddie Howe has already agreed to a salary cut.

Clubs are paid TV money in three tranches: in August, around January and at the end of the season.

In days gone by, they also paid transfer fees up front. Nowadays, though, bloated fees mean clubs often pay for players over years.

'You will buy a player having sold a player and everything is linked together,' explained Maguire. 'In total, Premier League clubs owe around £1.59bn in outstanding payments… they're only due to receive around £685m, so there is a net significant payment due. Some of those payments will have been made last summer and some will be outstanding payments.'

The system relies on confidence and should TV revenue come under threat, Purcell says it 'becomes incredibly vulnerable.' '(It's) the same as the liquidity crunch during the 2008 recession,' he added.

'(Banks) started looking at each other and saying: I'm not sure I want to lend to you. I don't think you're going to be in business tomorrow. The parallels with football are very similar… all it takes is that element of doubt to creep in and suddenly that house of cards collapses.'

Should 'one medium-sized club' default on a payment, Maguire says, 'that could cause a domino effect.'

And while an agreement could be reached between Premier League sides, the majority is owed to clubs around the world, which makes deals more difficult.

But clubs don't just lend money between themselves. It is common for them to take out short-term loans between TV payments to fund transfers or to maintain cash flow. According to Purcell, these can be hedged against incoming money, season ticket sales, or property the club owns.

Bournemouth received £16m last year from Australian bank Macquarie in anticipation of further instalments due for the sales of Tyrone Mings (£12m from Aston Villa) and Lys Mousset (£4m, Sheffield United). Leicester and Crystal Palace did similar following the respective departures of Riyad Mahrez in 2019 and Aaron Wan-Bissaka in the summer.

The small print varies. But there are three constants: banks want their money back, IOUs are harder to meet if revenue never materialises, and loans can be harder to find - and more costly - during economic uncertainty.

'Nobody envisages a default,' Purcell added. But now 'that's a distinct possibility.'

Even in less perilous times, clubs need help from upstairs.

During the 2018-19 season, Roman Abramovich pumped £247m into Chelsea, up £180m from the previous year. The club still made a net loss of nearly £100m after they missed out on the Champions League.

They are not alone. Maguire insists some clubs are now 'reliant' on owners.

'(Take) Newcastle, Mike Ashley has an awful lot of problems at present and Newcastle is not top of his in-tray. His retail empire will be suffering.'

He added: 'If the owner's own businesses aren't able to trade, then they don't have the resources to subsidise the football part.' Maguire warned that, with every passing week, the number of clubs at risk of going bust 'will creep up.'

Not even the biggest clubs are safe.

'When I read or hear stories about player transfers this summer like nothing has happened, people need to wake up,' Tottenham chief Daniel Levy said last week. 'Football cannot operate in a bubble.'

He was panned for furloughing non-playing staff, but could he be the canary in the coal mine?

The CIES Football Observatory predict players' value will drop by 28 per cent. Bundesliga chief Christian Seifert warned on Wednesday: 'In the short term I would say the transfer market this summer will not exist, it will collapse.

'Some agents will suddenly understand that they will have to work hard, or at least work; some leagues will understand that money is nothing that is coming automatically every month from heaven.'

That would spell bad news for clubs who raise funds through selling stars, and buying teams whose assets will drop in value. Particularly when they're still being paid off at full price. It promises to be a difficult few months.

Purcell concluded: 'The sums don't add up… you could put this in front of a child and a child with basic maths will tell you: this doesn't work.'