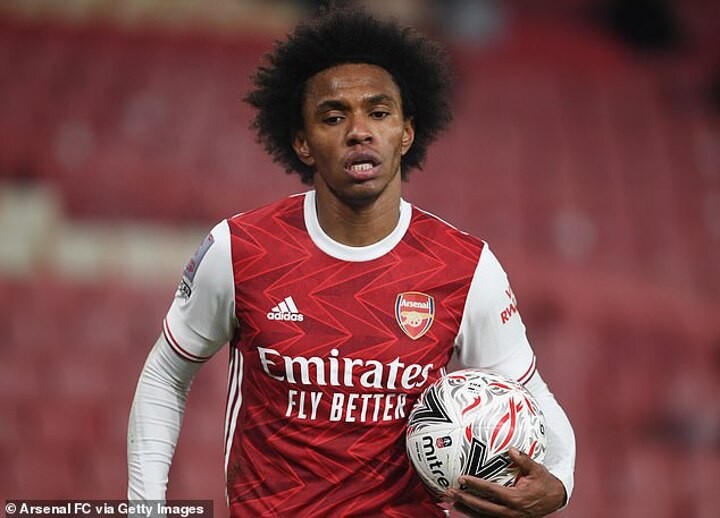 Arsenal flop Willian is eager to end his torrid time in north London with a move to Inter Miami in the summer, according to reports.

The Brazilian has scored just one goal from 37 appearances across all competitions for Mikel Arteta's side since joining on a free transfer last summer having left Chelsea.

But now The Sun claim the 32-year-old is already plotting an exit strategy from the Emirates Stadium less than a year on and is keen on moving to South Florida to team up with David Beckham's MLS side.

The report adds Miami boss and former England Women's manager Phil Neville is also interested in signing Willian, but will have to shift the underperforming Rodolfo Pizarro off the wage bill first.

Pizarro is one of the US franchise's highest earners but has failed to impress Neville having failed to score so far this season and was left on the bench last weekend in favour of Federico Higuain against Cincinnati.

The Mexico international is also one of two designated players allotted to each MLS side during the transfer periods, with the other spot taken up by former Juventus and Real Madrid star Gonzalo Higuain, who earns around £3.5million.

The same outlet claims Neville is hoping to conclude some deals before the primary transfer window - which has been open since 10 March - slams shut on 1 June.

A secondary transfer window then opens on 7 July before closing on 5 August.

However, speaking ahead of Wednesday's game against Crystal Palace, Gunners boss Arteta suggested the Brazilian could well stay at the Emirates beyond the summer.

'First of all we signed a player with an incredible talent, a proven talent and performance level in this league, and this season has been difficult,' said Arteta.

'I take full responsibility because I have to be the one getting the best out of him and we had moments but not to the level that he did before.

'This is an assessment that we will do individually with the players and with Edu, the board and the ownership to make the right decisions for the future.

'Every player that is under contract is very likely to be here with us next season.'

Willian mood was described as 'discontent' and 'ready to go' in a report in The Athletic earlier this month, having lost his place in the side to Bukayo Saka and Emile Smith Rowe.

The Brazilian signed a three-year deal worth £100,000-per-week and has managed seven assists during his time in north London, though two of those came on the opening day against Fulham.

The two-time Premier League winner had also netted double-digit goal tallies in four out of his last five seasons in west London, before managing just one this term in the north of the city.

As revealed exclusively by Sportsmail, Willian's close friend David Luiz will also be departing the Emirates this season after the two parties mutually agreed that his contract would not be extended.