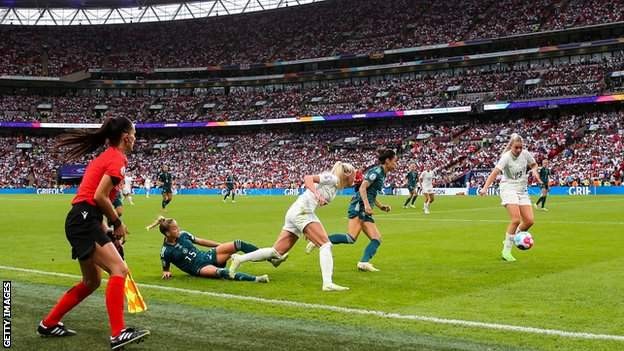 Women's football in Europe could have a commercial value of £578m a year by 2033, Uefa says.

New research by the governing body forecasts a potential six-fold increase in the figure during the next decade.

The fanbase for the game could rise from 144 million to 328 million across that period, according to projections making the case for investment.

"The potential of the women's game is limitless," said Kessler, discussing the findings of the Business Case for Women's Football study during a summer when the game has witnessed a huge level of interest because of Euro 2022.

"We believe we are on course to take women's football to heights that were unimaginable just a few years ago."

The finals, which were held in England and won by the hosts, would have broken the average attendance record for the tournament even if no-one had attended a match from the quarter-finals onwards, finishing with an average crowd of 18,544 per game.

The total of 87,192 fans who watched England beat Germany in the final at Wembley broke the attendance record for a game in Europe, which had been set by the Lionesses' opener against Austria at Old Trafford. The tournament had an aggregate turnout of 574,875 supporters.

Uefa said it had consulted 42 leagues, 162 clubs, the European Club Association and commercial partners, as well as leading executives about the game's growth.

The report looked at the progress of domestic leagues and the new-look Women's Champions League format, which has centralised marketing and TV coverage.

"As this report shows, now is the time to capitalise on the momentum we have created together," added Kessler.

A funny, moving and revealing look at a marriage: Sean Bean and Nicola Walker star in a brand-new dramaTransfer Gossip Daily: Get up to speed with the latest tantalising rumours