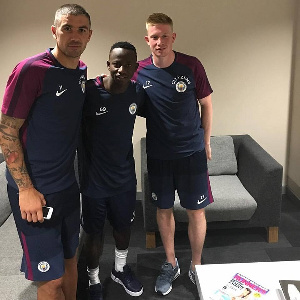 Ghanaian forward Yaw Yeboah has opened up on his playing days with English club Manchester City.

Yeboah joined Manchester City back in 2014 from Right to Dream Academy but struggled to make it into the first team which led to him being shipped out on loan to several clubs.

During an interview with Kumasi FM, the 23-year-old Celta Vigo forward said he will always be grateful for the opportunity to have signed with Sea Blue outfits.

“I was very nervous which was normal, the senior players could see the fear in me whenever I’m given the ball.

“But Vincent Kompany, who has always been a good leader walked to me and inspired me to do what I know best because he’s seen the capabilities in me.

“That approach helped me a lot which brought back the confidence. I remember how I made Pablo Zabaleta a subject of mockery by dribbling him on countless occasions during a training session,” he stated.

According to Yeboah, “Yaya Toure and Emmanuel Adebayor helped me a lot. They told me to enjoy the training and leave fear out of me and not be pressured by mistakes.

He added that the support Yaya Toure, Adebayor, Kompany, Fernandinho and David Silva gave him was unimaginable.

“David Silva, Vincent Kompany, and Sergio Aguero would call me along anytime they are having their separate individual training,” he concluded.