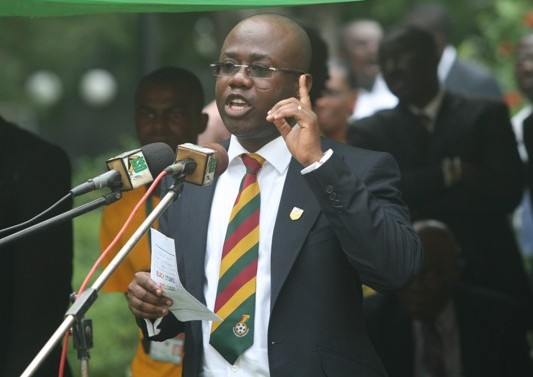 Kwesi Nyantakyi insists it is not yet time for him to exit his post as President of the Ghana FA - giving the clearest indication that anyone who emerges to contest him will be crashed.

The professional lawyer has been in charge of Ghana football since he fortuitously acceded to the highest office in 2005 to replace Dr. Nyaho Tamakloe.

Nyantakyi has since impressed, leading the Black Stars to three successive World Cup qualifications and initiating major structural changes in the administration of football in the country.

The Ghana Premier League has seen tremendous improvement in terms of sponsorship under his reign.

Nyantakyi was also heavily endorsed at the polls to become a member of the powerful CAF Executive Committee in 2011 on the basis of his exploits in Ghana.

His administration has however been accused of overly concentrating on the lucrative Black Stars to the detriment of the domestic game where many believe is deteriorating in quality due to the unrelenting mass exodus of players to foreign leagues primarily to benefit from better working conditions.

Some dissenting fans and members of the media have thus called for a change in the leadership at the Ghana FA but Nyantakyi says that time is yet to come with the next presidential elections scheduled to come off in 2015.

â€œI will be the one to will tell whether it is someoneâ€™s turn to succeed me [as Ghana FA boss],â€ he told Asempa FMâ€™s Fire for Fire presenter Patrick Osei Agyemang (Countryman Songo).

â€œIt is not time for the old ones [who previously contested him] how much more an emerging one?

â€œI am not God but I have the gift to see if the time is right for anybody to take over from me.

â€œBut that time is yet to come.â€

Nyantakyiâ€™s comments serves as a massive indication of his preparedness to crash anyone who emerges to contest him for the Ghana FA Presidency in 2015.

But sources close to the Heart of Lions owner suggests otherwise.

Former Executive Chairman of Asante Kotoko Dr. K.K Sarpong has also been rumoured to be eyeing the top seat but he has stated on several occasions he is not interested in the post.