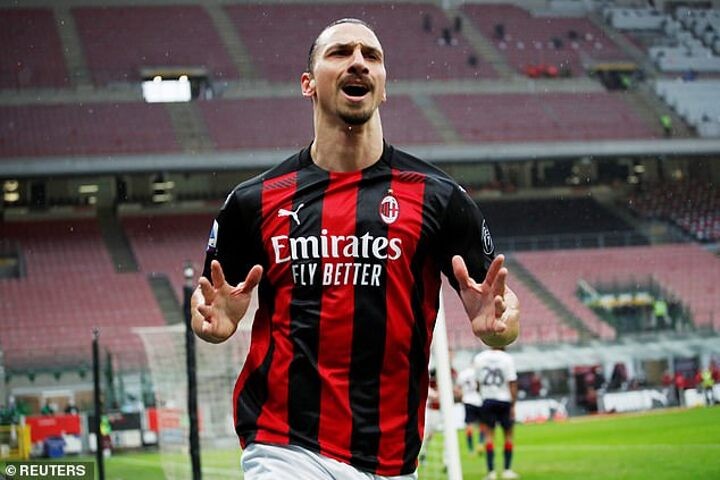 Manchester United fans fear Zlatan Ibrahimovic will come back to haunt their club after the Red Devils were paired against AC Milan in Friday's Europa League last-16 draw.

Ole Gunnar Solskjaer's side will host the Swedish striker and the Rossoneri in early March just three years after Ibrahimovic left Old Trafford to end his two-year stay at the Premier League giants.

The 39-year-old scored 29 goals in 53 games for the Red Devils and is currently challenging for the Serie A title with Milan - and United fans are worried that Ibrahimovic could help knock Milan their side out of the competition next month.

Upon seeing the draw, one fan tweeted: 'You just know Zlatan is coming back to haunt us. Pray for (Victor) Lindelof & (Harry) Maguire.'

Another said: 'Zlatan masterclass incoming against our defence, 100% #UELdraw'

One very excited United support added: 'TIME FOR THE BIGGEST BRAWLERS IN THE BUSINESS TO COME FACE TO FACE : ZLATAN HE FLYING KICKS IBRAHIMOVIC vs HARRY I KNOCK COPPERS OUT FOR FUN MAGUIRE.'

United have reason to fear Ibrahimovic in European competition as the Swedish forward helped the club win the 2017 Europa League under Jose Mourinho.

The striker scored five times in 11 games on the way to the final in Stockholm, though Ibrahimovic missed the 2-0 victory over Ajax to clinch the Europa League due to injury.

One supporter branded this year's Europa League encounter as 'the clash of the fallen giants', implying that both United and Milan are not achieving what they would like to both domestically and in Europe.

The 2017 Europa League title remains the last piece of silverware the Red Devils have won, while Milan have only lifted two Italian Super Cups since they last won the Serie A title ten years ago.

Meanwhile, the Rossoneri have not won a European trophy since the 2007 Champions League title, though Milan did lift the Club World Cup trophy later that year.

United reached the last-16 with a 4-0 aggregate win over Spanish side Real Sociedad. Milan, meanwhile, went through via the away goals rule against Serbian side Red Star.

Elsewhere in the draw, Arsenal were handed Olympiakos once again in the last-16. The Gunners were knocked out by the Greek side in last season's round of 32 and also played their most recent European match at Olympiakos' ground as a neutral venue.

Tottenham were handed a first-leg draw away at Croatian side Dinamo Zagreb, while Scottish side Rangers will take on Slavia Prague.