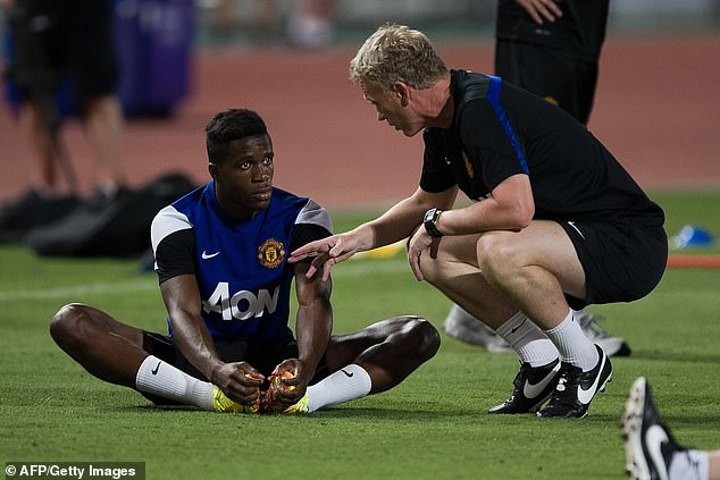 Wilfried Zaha has opened up on his anguish at being left to deal with social media gossip about him and David Moyes' daughter during his time at Manchester United.

Despite being one of United's best players on their pre season tour of Asia, Zaha was left out of the first-team for the start of the 2013-2014 season and rumours about the reasons for his omission began to circulate.

In an interview with former team-mate Rio Ferdinand for The Locker Room , the winger explained how he felt obliged to discredit the Twitter gossip because he had not received any guidance from the club.

'No one at the club at all told me anything, I didn't know what to do whatsoever,' he said.

'I'm here by myself, struggling because people are telling me I've slept with the manager's daughter and that's why you're not playing me.

'The funny thing is, it's carried on for so long I felt like, is the manager not going to come and have a word with me over this?

'That's how I felt and I'm thinking this is ridiculous man. Up to this day I still get people that think that's true and I've never even met his daughter.'

Zaha was sent out on loan to Cardiff in January before spending the following season with his former club Palace.

His return to Selhurst Park was made permanent on the final day of the 2015 winter transfer window.

The winger spoke about the difficulties of being on his own in Manchester, having moved away from his family in London, and how difficult it was to deal with the rumours surrounding his personal life.

'I'm 19, I'm living in Manchester and all of a sudden we come back from a tour and I'm not playing for no reason so obviously are going to make up rumours.

'I'm in Manchester where I'm by myself and I'm not playing on top of that so it's stressful enough to have a rumour.

'People came out with it, I see it trending on Twitter, people came out with how can he play so well on tour then just be dashed out like that with nothing, no one telling us anything - he must have slept with the manager's daughter.

The Ivory Coast international has prospered since his return to South London with 31 goals and 42 assists in his last five Premier League seasons.