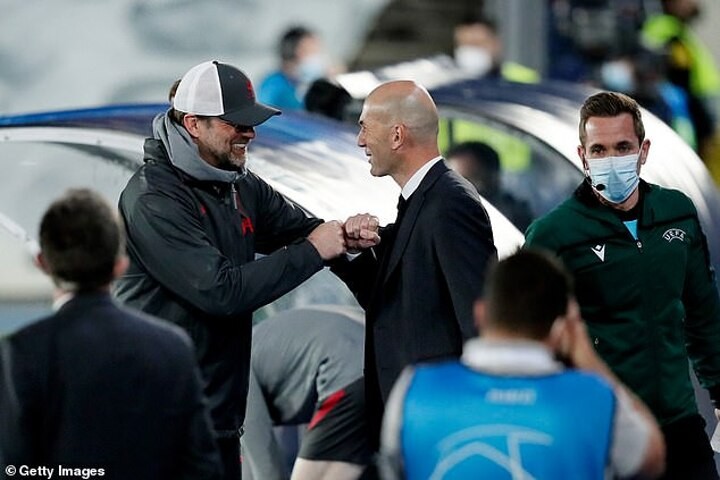 Zidane Zidane has snapped back at Jurgen Klopp after the Liverpool boss bemoaned Real Madrid's decision to host the Champions League quarter-final at their modest, 6,000 capacity training stadium.

Madrid have played throughout the pandemic at their Alfredo Di Stefano Stadium in Valdebebas due to development work being carried out on the famous Santiago Bernabeu, yet Klopp still took exception following the match.

Following the 3-1 defeat Klopp had noted that Liverpool will at least be staging the second leg inside a 'proper stadium,' but Zidane has now has his say and insists he has no opinion on what his counterpart thinks.

Klopp had told reporters during his post-match press conference: 'This was strange tonight because it was really difficult with the stadium (at Madrid's training ground) but Anfield is at least a proper stadium and it will be good for us.

'It must be a really tricky task for Real Madrid at Anfield,' Klopp added.

When told about Klopp's words, Zidane simply told reporters in Spain after the final whistle: 'I don’t have an opinion about what Jurgen says, we are proud to play in this stadium.

'Liverpool is the opponent and we know they are going to leave all they have on the pitch, I have no question about that.

'We just need to be ready and it is going to be a very good second leg match. We will need to do the same thing in the second leg.'

The Frenchman added: 'We are happy with the result but we have won nothing.

'We are happy with the performance and what the players have done is huge after a lot of difficulties in our season.'

Liverpool have form when it comes to overturning deficits against Spanish opponents, after needing four goals to get past Barcelona in the semi-final stages of 2019.

The Reds had been beaten 3-0 at the Nou Camp courtesy of a sublime Lionel Messi performance, though somehow managed to take a 4-0 reverse victory at Anfield despite being without both Mohamed Salah and Roberto Firmino.

Much of that victory had been owed to Anfield's roaring atmosphere, which will be absent next week as Madrid lock horns with Klopp's men once again.

The victors of the tie will go on to face either Chelsea or Porto in the semi-finals.

Chelsea currently lead in the fixture, having recorded a crucial 2-0 victory in Portugal on Wednesday night, with goals courtesy of Mason Mount and Ben Chilwell.