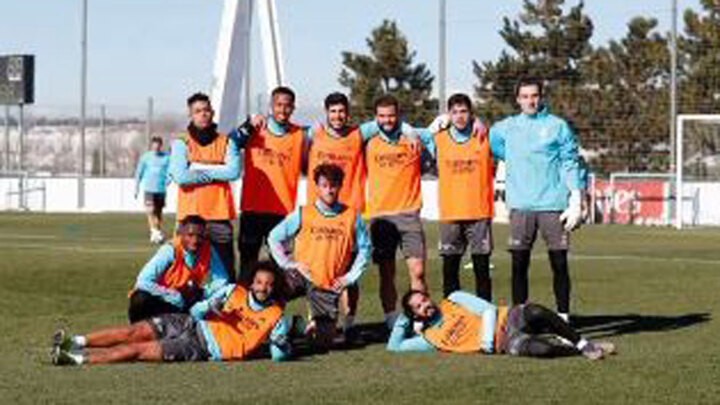 Zinedine Zidane has tested out a starting line-up with a whole new back four, but without Martin Odegaard or Eden Hazard, ahead of Real Madrid's Copa del Rey game against Alcoyano.

The team that the Frenchman put together in Monday's training session had Andriy Lunin in goal, Alvaro Odriozola, Nacho Fernandez, Eder Militao and Marcelo in defence, with Casemiro, Fede Valverde and Isco placed behind Vinicius Junior, Marco Asensio and Mariano Diaz.

As expected, Zidane is going to rest several starters and Real Madrid TV's plans confirmed that the Frenchman has tried out a starting XI with many changes.

The back four and goalkeeper who formed Real Madrid's defence in the session have played 21 games in total this season. Lunin has yet to debut, while Nacho has featured in 10 matches, Marcelo in seven, Militao in three and Odriozola just once.

The most striking absences from the aforementioned eleven would be those of Odegaard, who has hardly been given any playing time lately and Hazard, who may start on the bench as Zidane avoids taking risks with the Belgian.

What is certain is that Sergio Ramos will not travel to face Alcoyano, while Karim Benzema, Toni Kroos and Luka Modric may be given a rest by Zidane.

This will be Real Madrid's first Copa del Rey game this season, while the Segunda B side have already knocked out Laredo and Huesca on their way to the Round of 32.