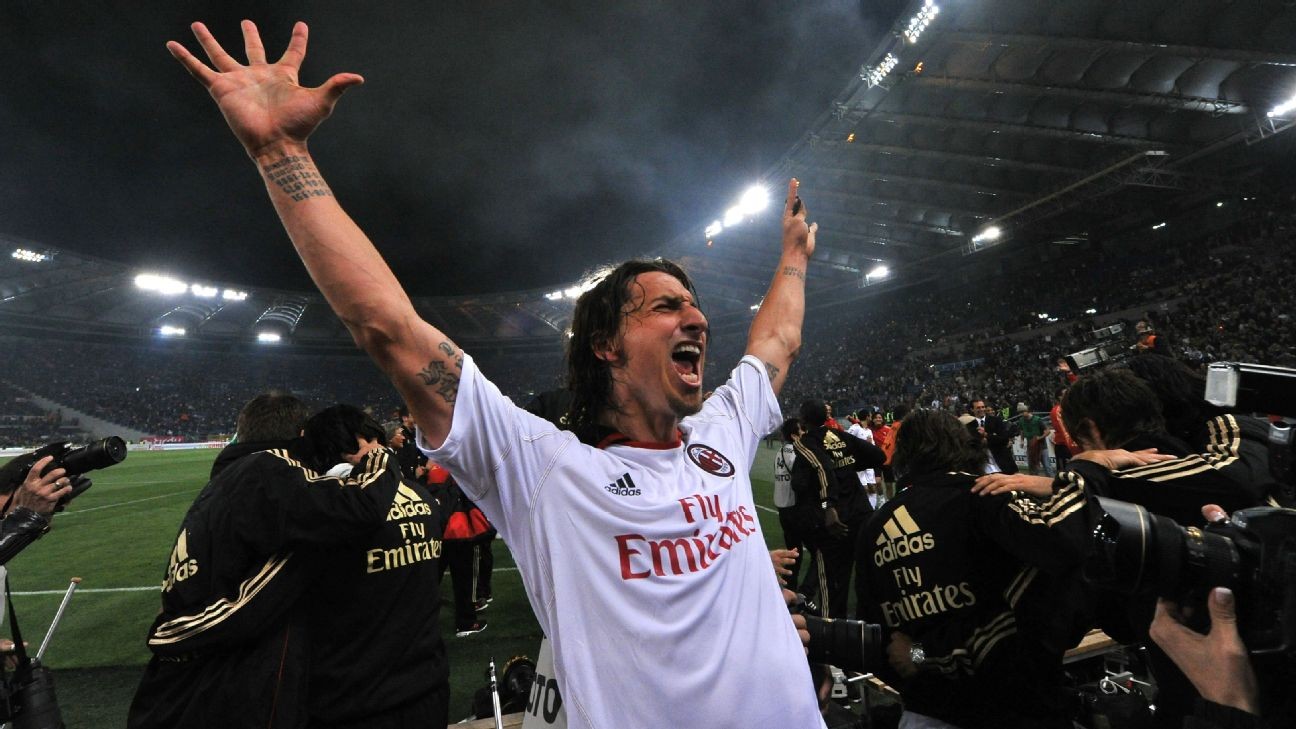 As the coronavirus pandemic continues to impact the football world, the transfer market will change radically. Clubs are likely to turn to loan and swap deals rather than paying up front for a player, so we look back at some of the best and worst loan moves ever in Europe.

Ten years and over 200 goals into his career, there are still some people unconvinced by Lukaku, but you only need to look at his season on loan at West Brom for proof of his ability. The 19-year-old scored 17 Premier League goals, a tally matched by no other Baggies striker in the top division since 1979. The following year they narrowly avoided relegation -- their top scorer managing five -- as Lukaku moved on to Everton, Man United and Inter.

A slightly thorny one, because Tevez wasn't technically on loan at Man United from a club, more from agent Kia Joorabchian's investment vehicle MSI. But admin wrangling aside, Tevez was brilliant for the two seasons he was at Old Trafford, scoring 34 in 99 games and forming part of a quite remarkable forward line with Wayne Rooney, Cristiano Ronaldo and Dimitar Berbatov before making a controversial permanent move to rivals Man City.

The man Sir Alex Ferguson called an "aristocrat" only scored three times in his loan spell at Old Trafford from Swedish side Helsingborg, but it was his aura and influence that made the Celtic legend a success. "All the players stood up and applauded him, and the staff joined in," Ferguson said about Larsson's last game at United in March 2007. "It takes some player to make that kind of impact in two months."

- Stream new episodes of ESPN FC Monday-Friday on ESPN+
- Stream every episode of 30 for 30: Soccer Stories on ESPN+
- Where Europe's top leagues stand on finishing 2019-20 season

Dugarry won the World Cup European Championship with France and played for Milan and Barcelona during his career, but in certain parts of the Midlands in England he is best remembered as the man who saved Birmingham from relegation, having joined for six months from Bordeaux. The Blues were heading for relegation, but a run of four wins in April -- as the 30-year-old scored five goals -- kept them up.

Ibrahimovic's 2009 transfer from Inter to Barcelona was one of the great transfer follies, but his subsequent loan to Milan -- after saying Barca manager Pep Guardiola "bought a Ferrari and drove it like a Fiat" -- went better. He scored 21 goals as Milan won Serie A, which would turn out to be their last Scudetto (at the time of writing), before signing permanently the following summer.

Zlatan Ibrahimovic didn't shine at Barcelona, but he did at Milan.

The circumstances of Campbell's loan to Everton are pretty unpleasant, after his chairman at Turkish club Trabzonspor called him a "cannibal" and "discoloured." Determined to get out, the former Arsenal striker joined Everton in March 1999 when they were fighting against relegation, but with nine goals in eight games, including six in his first three, he basically saved them single-handedly.

Klinsmann was already a Spurs hero after his first spell there in 1994-95, but he further enhanced his reputation by saving them from relegation three years later. Klinsmann scored nine goals in 15 Premier League games -- four coming in one game against Wimbledon -- as Spurs avoided the drop. He made Germany's 1998 World Cup squad and became the first player to score at least three goals in three consecutive tournaments.

He was only there for a few months, but the face of modern Barcelona could look very different were it not for Davids, who arrived with Barca languishing in mid-table and manager Frank Rijkaard not far from the sack. Davids galvanised the side to finish second, after which he left for Inter, but Barca went on to win La Liga the following season, which saw a certain Lionel Messi debut. The rest is history

Courtois was so good and achieved so much at Atletico that it is odd to even associate him with Chelsea, the club that owned him for seven years. In three seasons, he won the Europa League, Copa del Rey, La Liga, reached the Champions League final and won two Zamora awards for best goalkeeper in Spain. He returned to spend four seasons at Chelsea before moving to Real Madrid in 2018.

Few could argue that Real Madrid signing the Brazilian Ronaldo in 2002 turned out badly, but it did inadvertently lead to their elimination from the 2004 Champions League. Morientes, no longer required, was sent to Monaco, but nobody thought to include a clause preventing him from facing his parent club. He duly scored in both legs as Monaco knocked out Real on their way to the final, where they lost to Jose Mourinho's Porto.

Man City's €45m signing of Mangala from Porto in 2014 was meant to provide a long-term replacement for Vincent Kompany. Instead, the Frenchman made just 79 appearances in four years, with loans at Valencia and Everton also proving unsuccessful. At least he played for Valencia in 2016-17, making 30 appearances; for Everton the following season he was injured after one and a half games and never played for City again.

Higuain could feel aggrieved when Juventus signed Cristiano Ronaldo in 2018: he had, after all, scored 23 goals the previous season to help them win the title. But he was no longer required and was sent on loan to Milan, where he scored six league goals. That deal was terminated in January, and he was moved to Maurizio Sarri's Chelsea, scoring only five times in 19 games before returning to Turin when Sarri took over.

The optimism from some Arsenal fans when Suarez joined from Barcelona was adorable. Less enthusiastic was their collective mood by the end of his half-season in London, which by his own admission saw him never more than 50% fit from its second week. He returned to Catalonia having played just six times and failing to score for the Gunners.

The important thing when a new signing arrives at a club is to make them feel at home, and even if they weren't your first choice, build their confidence a bit so they can hit the ground running. "Clearly he isn't the top player we wanted, but we needed reinforcements," said Juve director Beppe Marotta when Bendtner joined. In fairness, Marotta turned out to be right: the Danish striker played 11 times and did not score.

When Man United found themselves in a bind with first-team goalkeepers Fabian Barthez and Raymond van der Gouw injured, and Mark Bosnich having left for Chelsea on a free, ex-Scotland international Goram -- aged 36 and about to be released by Motherwell -- was signed on loan. He played two games, conceding four goals and being substituted twice -- and managed to get into several training ground rows with Roy Keane.

Radamel Falcao failed to impress at either Man United or Chelsea.

It was a shame that Falcao joined Man United when he did. The Colombian striker was a force of nature in his pomp at Atletico Madrid, scoring 70 goals in 91 games, but after moving to Monaco he suffered a cruciate ligament injury and tried to rush back for the 2014 World Cup. At Old Trafford, he managed just four goals in 29 games, but his injury-hit move to Chelsea the following season was even less productive: he scored one in 10.

When the news broke that Leeds, struggling after their financial world had caved in, were signing a World Cup winner, optimism abounded. But while Milan defender Roque Junior was a key part of the Brazil side that won the trophy in 2002, he wasn't exactly Ronaldo, Ronaldinho or Rivaldo. He was sent off in his second game and relegation-bound Leeds lost all five matches he started, conceding a total of 20 goals in the process.

Arsenal discovered, during his medical, that the 33-year-old had a back injury suffered during a training session on the beach, but signed him anyway, so could not really claim surprise when he was only able to hobble onto the pitch four times. Kallstrom did score a penalty in an FA Cup semifinal shootout against Wigan at Wembley, which he later described as "the greatest 15 minutes of my life," but was left out of the matchday squad for the final.

"The final straw at Newcastle came when the club went behind my back to sign two substandard players as a multimillion-pound favour for a pair of mysterious South American agents," wrote then-manager Kevin Keegan in his autobiography. One of those was Uruguay international Gonzalez, who played only twice for Newcastle during his loan spell. His arrival was one of the reasons why Keegan resigned a few days after the signing.

Alvarez's star fell after a bright start at Inter, and things didn't get better in England. A loan clause required Sunderland to buy the winger if they avoided relegation; they did, but argued the deal wasn't valid because of a knee injury that limited Alvarez to 13 games. The Court of Arbitration for Sport disagreed and made the club pay £9.5m. Because the transfer wasn't officially completed, though, he was a free agent and signed for Sampdoria, so the money Sunderland paid was for literally nothing!