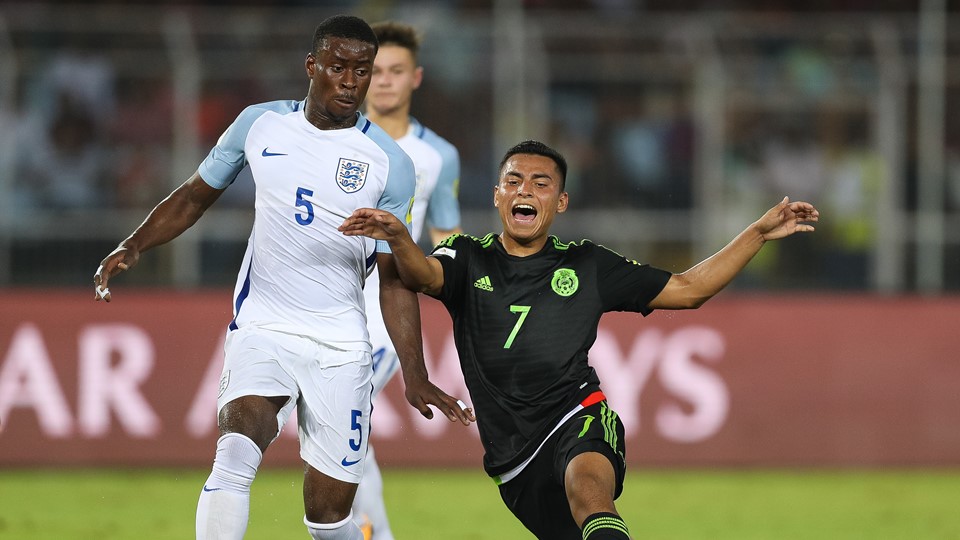 KOLKATA, INDIA - OCTOBER 11: Marc Guehi (L) of England battles for the ball with Jairo Torres of Mexico during the FIFA U-17 World Cup India 2017 group F match between England and Mexico at Vivekananda Yuba Bharati Krirangan on October 11, 2017 in Kolkata, India. (Photo by Buda Mendes - FIFA/FIFA via Getty Images)
Share

England again impressed in Group F at the FIFA U-17 World Cup India 2017 after holding off a furious Mexican rally to win 3-2 and qualify for the Round of 16.

The English, who beat Chile 4-0 in their opener, were ahead by three goals and in full control of the match, but the two-time U-17 world champions found another gear near the hour mark, and Diego Lainez’s seven-minute brace made for a dramatic ending to the contest.

Rhian Brewster scored the only goal of the first half with a lovely 25-yard free-kick over the Mexican wall, which came as a relief to the Liverpool forward after missing from in front of an open goal in the opening minutes of the match.

The Three Lions pulled away after the break, as Jadon Sancho set up Philip Foden, who fired in a pinpoint shot from just inside the box, and then converted a penalty himself after El Tri captain Carlos Robles handled the ball in his own box.

Lainez was fortunate in his first goal after his powerful shot deflected off Joel Latibeaudiere, but his second goal was down to placement, as he scooped a left-footed shot across England goalkeeper Curtis Anderson and inside the far post.

The CONCACAF champions piled on the pressure in the closing stages, with the Kolkata crowd egging them on, and Alexis Gutierrez went close from 20 metres before Roberto de la Rosa headed over the crossbar. In the end, it was not to be, and Mexico are on just one point from two matches played.