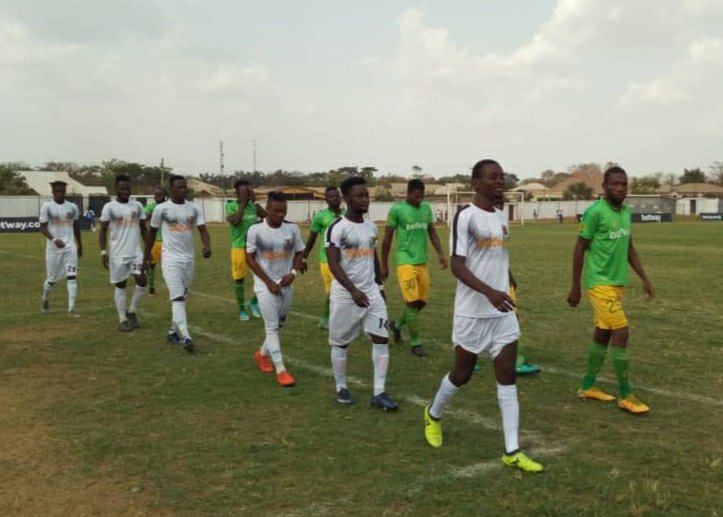 Aduana Stars failed to make their home form count as they were held to scoreless draw by AshantiGold SC on Sunday at the Nana Agyemang Badu park.

Paa Kwesi Fabin was eyeing a win to mark his first home game as head coach of the home side.

Thomas Duah, also making his debut as stop gap coach for the visitors will be happy to take the draw after they were humiliated 6-1 last week.

Fabin making his home debut as coach of the Fire Boys made just one alteration to his set up which won 1-0 at Dreams FC.

John Nyamekye handed his first start of the season in place of Fatawu Abdulman.

Joshua Tijani was also lined up to face his former club for the first time since he left.

Thomas Duah is his first game at the dugout for the visitors made three changes to the lineup that lost 6-1 to WAFA SC last week.

Atta Kusi came in for the suspended Kwadwo Amoako at right back.

Eric Esso earned his first start of the season as he replaced James Akaminko with Abdul Latif Anabila also making way for the versatile Frank Akoto in midfield.

The Miners were slightly on top in terms of dominance but there was nothing to show at the end of the first half.

Aduana Stars looked solid at the back making sure they contained the visitors.

The hosts came close to opening the scoring twice in the second half but the efforts from Yahaya Mohammed and Richard Kwesi Nathan missed the goalposts by a whisker.

Appiah McCarthy nearly got AshantiGold the lead but his effort was inches away from goal.

Aduana Stars will travel to Sogakope to face WAFA SC on Wednesday with AshantiGold SC hosting Bechem United on the same day in the next round of fixtures.