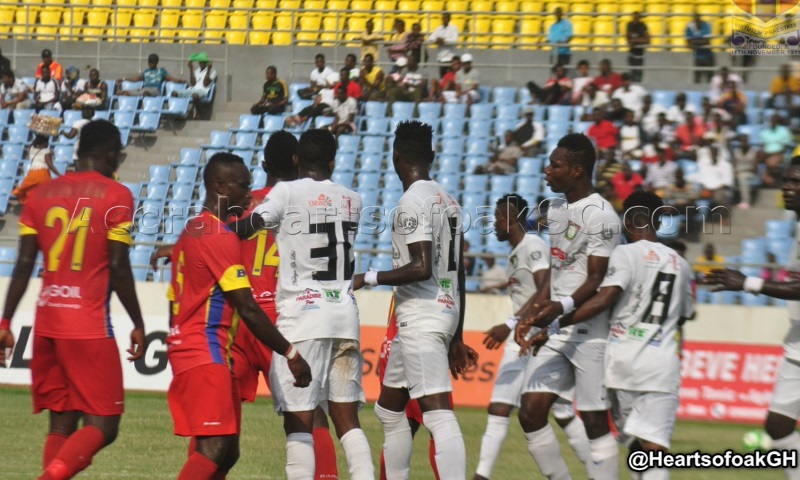 Both sides will be looking at bouncing back from defeats on Match Day 6 in the Ghana Premier League, making it a highly anticipated fixture.

Dreams FC suffered a 2-1 defeat to Ebusua Dwarfs on Monday in Cape Coast with Hearts of Oak losing to arch rivals Asante Kotoko in the Super Two clash.

Despite falling to their fierce rivals, the Rainbow club put up an impressive performance as they continue to revive a season which began with two disappointing defeats.

Dreams FC have been inconsistent after an explosive start saw them win their first game 4-1 against King Faisal and travel to Techiman to beat Eleven Wonders.

The 'Still Believe' lads have lost to league leaders Berekum Chelsea on the road before beating Medeama.

Hearts had been on a run of three games without defeat before they were stopped by Asante Kotoko.

Dreams FC lie tenth on the table with the Phobians in 13th position, just three points behind their opponents.

The last time the two sides met in Dawu, Dreams won in the NC Special competition.

"The last time we met them in the NC Special competition, we beat them so we are going to beat them again," said a confident Dreams FC coach Karim Zito.

Dreams FC have no injury concerns in camp and will welcome the Phobians with a fully fit squad.

Meanwhile, Hearts of Oak are set to unleash former Bechem United forward Abednego Tetteh, who joined the club some few weeks ago.

The lanky forward could make his debut for the Phobians on Sunday. Striker Joseph Esso is fit for the game after a cut he suffered against Asante Kotoko.