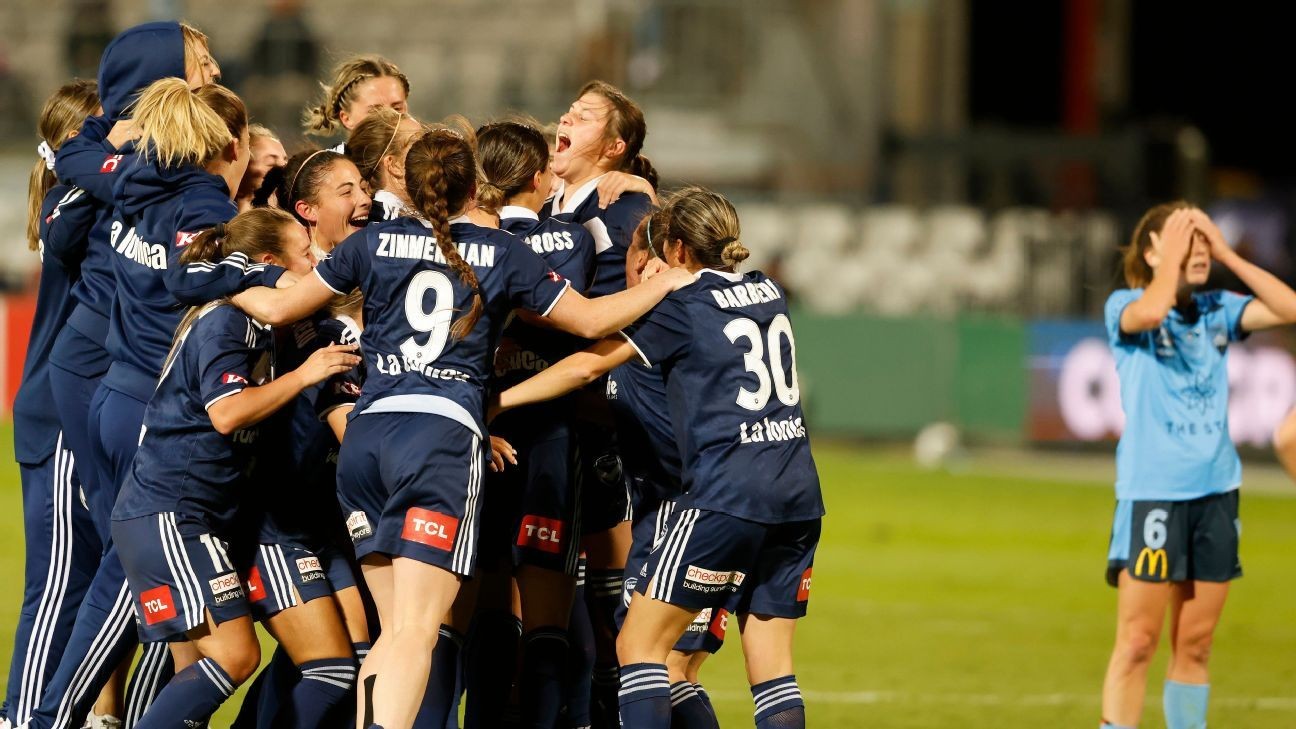 "It is freshwater country, and it is where we come and honour our women and the place they play in our communities.

"It is the ancestors that I come from -- the amazing women activists, artists -- who overcame so much oppression and so much adversity to make sure that I was here today to be able to welcome you all.

"And so I would like to pay my respects to all the women here today who are playing, but also to the coaches, the umpires, the best friends, the mums, the aunties, the grandmothers, the sisters...

"May you always walk in the sunshine."

There was something particularly moving about these lines as the broadcast cameras slowly panned across the players of both Sydney FC and Melbourne Victory at Jubilee Stadium on Sunday afternoon.

Those words and the accompanying images were, for me, a kind of broad brushstroke that captured the history of these two clubs and of the W-League itself. Players who emerged onto the league stage over a decade ago -- Lisa De Vanna, Annalie Longo, Teresa Polias, Amy Jackson -- stood side-by-side with those who are emerging today: Kyra Cooney-Cross, Jada Mathyssen-Whyman, Angie Beard, Ally Green, Polly Doran, Princess Ibini.

It is fitting, then, that these two teams ended up contesting this season's Grand Final -- a season that has been, perhaps more than ever before, about the slow turning of the page from one generation of stars to the next.

This happened before, of course, when the last generation of senior players like Lana Harch, Sarah Walsh, Catherine Cannuli, Kate Gill, Joey Burgess, Kate McShea, Thea Slatyer, Heather Garriock, Amy Chapman and Sally Shipard stepped aside to usher in the players of the future; many of whom have now become the face of the women's game in Australia and around the world.

Indeed, the last time these two clubs met in a W-League Grand Final in 2012-13, the two elder stateswomen who have, in part, come to define each of them -- Polias and De Vanna -- took to the field alongside players like Sam Kerr, Steph Catley, Alanna Kennedy and Caitlin Foord who would go on to help lift women's football into its new, fully-professional era.

A lot has been written -- especially in this column -- about what the 2020-21 season is and what it means for the future. Nobody really knew, given all the uncertainty in the preceding months, what awaited us when that first ball was kicked in late December.

There were so many new faces, new names, new tangles of individual and collective stories. The safe and familiar characters who we'd grown to know and love had, understandably, sought greener pastures elsewhere.

The unintended consequences of the Golden Generation discourse -- namely, the players who had been kept in their shadow; the Unknown Generation -- were, all of a sudden, being forced to step into the roles of the players they had only ever been understudies for. Naturally, then, there were questions and hesitations about what the future really looked like for the league and for the women's game.

But Sunday's Grand Final delivered the perfect riposte to those who doubted Australia could offer up a group of local players capable of generating the same excitement, the same passion, the same gripping storylines and the same on-field chaos that has made the W-League such a special and unforgettable competition over the past 13 seasons.

It was a match that waxed and waned, each side gaining and losing momentum as 90 minutes ticked into 120. A number of players stood out at various times, offering gasps of attacking threat or heaving sighs of defensive relief. Crossbars were rattled, counter-attacks were half-executed, impossible saves were made, inches of shin-pad or glancing headers swaying the match this way and that.

The game itself embodied what the 2020-21 W-League season itself has endured: studded with unexpected injuries and unplanned substitutes, broken boots and exhausted bodies, heart-stopping and career-defining moments, and the desire to extend the season to the last possible minute.

These miraculous players, almost all of whom are part-time athletes trying to live up to full-time expectations, gave everything of themselves to those 120+ minutes, creating what will go down in history as one of the most thrilling ends to one of the most thrilling W-League seasons yet, capped off with a symbolic moment of individual olimpico brilliance by teen sensation Cooney-Cross.

There was a moment in the aftermath of full-time, though, that will stay with me as a defining image of this game and this season. In among the waves of fans, staff, players and families, the W-League's all-time record appearance holder -- Polias -- and the country's all-time top scorer -- De Vanna -- embraced.

Polias, barely capable of standing on her own two feet, was visibly devastated. But she was held up by her opponent and colleague, De Vanna, who kept a strong, steady arm around her slumped shoulders for several minutes as they watched their young apprentices collapse in tears and in triumph around them; taking in just how far the league and the sport they have both given so much of their life to had come.

It was the clearest illustration, for me, of Foster's opening words. These two players -- and the many others they represent -- are, in the most respectful of ways, the ancestors of the women's game; the women who have suffered so much and received so little in return, whose contributions and sacrifices we may never fully understand or repay.

There is, I think, one conclusion we can draw from the 2020-21 campaigns: that, despite all the adversity it has faced -- the disastrous broadcasts, the shifting fixtures, the border controls, the lockdowns, the unacceptable playing surfaces, the injuries, the fatigue -- these remarkable players, and therefore this remarkable league, endures.

It has learned how to endure from players like Polias and De Vanna, who started with nothing but gave everything to it anyway. Neither of them, it seems, has decided what their own futures will look like. But one thing is for certain: there is a future that they will always be part of, because it is one that they have created for themselves and for those who will come after them; the sunshine in whose warm light the women's game will walk in forever.