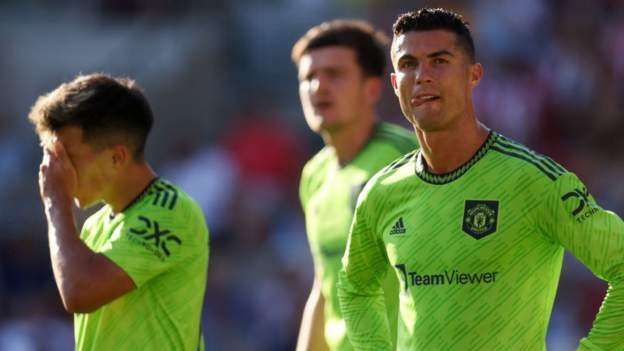 If last weekend's defeat at home by Brighton served as a warning for Manchester United and their new manager Erik ten Hag, then Saturday's embarrassing loss at Brentford will have sent alarm bells into overdrive.

The Red Devils' first away match of the new campaign ended in a sobering 4-0 reverse, which leaves the Red Devils without a point - and bottom of the league - after two games and desperately searching for answers.

Former England striker Alan Shearer told BBC Match of the Day: "It is an absolute mess. Years of failure, years of mismanagement. There is a lack of leadership and the recruitment has been terrible.

"It will take time and an unbelievable amount of money to get things right, and a lot of patience from the Man Utd fans. They are miles away from where there want to be."

So just how bad is the situation at Old Trafford? BBC Sport takes a closer look.

'Bullied, mauled and messed about with'

If United's travelling fans were hoping for a fast start from their team in response to last Saturday's loss to Brighton, they were left disappointed.

Ben Mee nodded Brentford further in front, before Bryan Mbeumo latched onto a long ball to put the hosts 4-0 up after just 35 minutes.

Sky Sports pundit and former captain Neville did not mince his words at full-time, telling viewers "we are witnessing the annihilation of Manchester United".

"I thought United would do better but they have been mauled, bullied, messed about with like you wouldn't believe, and there's nowhere to hide.

"I have been watching United for 42 years and I can't think of a moment when I have thought things have been as bad as that in the first half."

This is the first time United have started a league campaign with consecutive losses since the first edition of the Premier League - which, funnily enough, they went on to win.

The stats don't make pleasant reading for Ten Hag either, the Dutchman becoming the first manager since John Chapman in 1921 to lose his opening two games in charge of the club.

The Red Devils' recent away record is atrocious - this is the first time they have suffered seven straight league defeats on the road since 1936, when they tumbled to 11 consecutive away losses.

Remarkably, United have now conceded four goals in seven separate games since the beginning of the 2021-22 season. They have also let in four first-half goals on three occasions since October 2020.

To add insult to injury, this is Brentford's biggest top-flight win since beating Grimsby Town 6-1 in April 1938.

Liverpool, who visit Old Trafford a week on Monday, must be licking their lips.

Glazers 'haven't got a clue'

Then there are the club's owners.

There have been multiple protests against the Glazer family's ownership of the Old Trafford side in recent years - including one in May 2021 which caused the Red Devils' match against Liverpool to be postponed.

United fans are planning another protest against the American family, who have owned the club since 2005, during their latest meeting with their bitter rivals.

#EmptyOldTrafford has even been trending on Twitter as supporters call for a boycott of the game a week on Monday.

"Joel Glazer has to get on the plane tomorrow," Neville said. "He has to get over to Manchester and he has to start to divert the issues away from the club and tell everybody what his plan is with the football club.

"When a business is failing and not performing, it is the owner of that business's fault. It is failing miserably.

"They took £24m out of the club two months ago, now they have a decrepit, rotting stadium that is second rate, when it was one of the best stadiums 10 to 15 years ago.

"You've got a football project where they haven't got a clue. You can look at the players all you like, but there are big things that need to be put right.

"They have to show up and face the music. The club is rotten."

MUST, the club's Supporters' Trust, issued a statement in the aftermath of Saturday's defeat, saying the result feels like "the culmination of a long-term direction of travel".

It added: "What we have witnessed tonight is an embarrassment - no, a humiliation - for Manchester United fans. And yet in many ways it was not a surprise."

View more on twitterUnited seen as 'a joke' in Europe

A stunned Ten Hag admitted after the full-time whistle that United need quality players - but on this evidence, who would want to join them?

United's protracted move for Barcelona midfielder Frenkie de Jong appears to have stalled, with the Dutchman reluctant to leave the Spanish giants because of a contractual disagreement which centres on deferred payments.

They have already splashed out over £65m on Tyrell Malacia, Christian Eriksen and Lisandro Martinez this summer, which takes the club's spending since their last trophy - the 2017 Europa League - to about £672m.

United ended their recent interest in Bologna striker Marko Arnautovic because of a combination of the Italian club's transfer fee demands and the negative reaction from Red Devils fans.

However, negotiations are reported to be at an advanced stage with Juventus midfielder Adrien Rabiot.

"The non-existence of a transfer strategy, not just now but since Fergie [Sir Alex Ferguson] left, is not just baffling, it's outrageous."

"The recruitment has not been good enough over the last 10 years. Look at the centre forwards they have signed - [Edinson] Cavani, [Zlatan] Ibrahimovic, Falcao, [Odion] Ighalo. Now they're linked with [Marko] Arnautovic. Where is the recruitment process?"

'Sick to our stomachs' - how social media reacted

Dean: It's fitting we chose a bright green kit as that's the face of every Man United fan watching. Sick to our stomachs.

Andrew: If *Brighton* and *Brentford* are able to take Manchester United to the cleaners... what will the likes of Arsenal, Liverpool, and Manchester City do to this team? Utterly clueless. United are going to be relegation candidates & Erik ten Hag will be out by Christmas.

Zahi: I reckon most of these Man United players will have plenty of time for Xmas shopping when the season breaks. No way any of them will be in Qatar.

Baron: Frenkie de Jong's chance of signing for United just went from 0% to 0%.

Barotta: Man U will get their first points before the World Cup break for sure.

Alex: It's great to see the Man Utd fans crying. Very loud when they are winning but when the club goes through a bad patch they soon turn. Real fans?? Glory hunters!