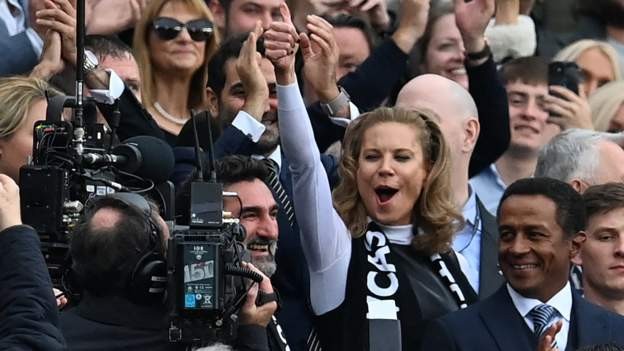 Newcastle United fans have had little to cheer in recent years so perhaps it was little wonder many got carried away on Sunday by the optimism surrounding the club's new Saudi Arabian-backed era, no matter the consequences.

But then the football started.

Prior to kick-off against Tottenham, the city was awash with excitement. Fans swarmed the streets around St James' Park dressed in black and white. Some wore headdresses and draped Saudi flags in tribute to their new owners, who have promised a brighter future after years of stagnation. More than anything, they have provided hope to a club which has been treading water.

Saudi Arabian students who had travelled from Birmingham were asked for pictures, Kuwaiti students based in Newcastle had turned up to sample the "vibes". Over the road from the statue of former manager Sir Bobby Robson, a drummer inspired supporters to dance.

Such exuberant scenes were in stark contrast, though, to a protest nearby. A van with a picture of the murdered Saudi journalist Jamal Khashoggi circled the stadium. Western intelligence agencies believe the Crown Prince of Saudi Arabia, Mohammed bin Salman, ordered Khashoggi's murder in 2018 - which he denies.

Inside the ground, Newcastle's fans were determined to celebrate. The group Wor Flags were taking their seats for the first time in 897 days. They had turned their backs on the club because of disillusionment over Mike Ashley's 14-year reign, but had returned to display their vision of the future in front of the new owners.

Their flag, which stretched across the Gallowgate End, quoted lyrics from Big River, a 1995 song by local hero Jimmy Nail.

"This is a mighty town built upon a solid ground," it said. "And everything they've tried so hard to kill, we will rebuild."

Its reveal was met with the type of roar we have come to expect from St James' Park. Some fans were in tears about a day they thought might never come.

It must have been everything that part-owner Amanda Staveley hoped for as she was joined in the directors' box by new non-executive chair Yasir Al-Rumayyan, who is also the governor of the Saudi state's Public Investment Fund, which has provided 80% of the capital for the £305m takeover.

The euphoria was palpable, and it carried over into the match as Callum Wilson nodded in a header after two minutes to make home fans believe again.

Staveley hugged her husband and Al-Rumayyan, who broke out into a broad grin. If the 51-year-old needed a demonstration of why the Saudis were right to invest, this was perfect.

With Allan Saint-Maximin zipping about the pitch and Wilson sniffing another goal, perhaps the demand for an upgrade in players was over-stated?

But then the symptoms of the Ashley era came into view and showed the new owners how big a task they face.

Joelinton, the club record £40m forward who cannot score, fluffed a pass. Newcastle's midfield failed to offer their defence any protection, allowing Spurs to cut through and set up Harry Kane for his first league goal of the season.

After a lengthy first-half stoppage as a fan was treated for a medical emergency, it was the visitors who re-emerged more focused. The lack of depth in Newcastle's squad was also exposed when Jonjo Shelvey was brought on to try to turn the game around and ended up being sent off for two clumsy challenges, the second described as "stupid" by Magpies legend Alan Shearer.

Newcastle managed just 35% possession and one shot on target

The jubilation seen in the directors' box early on was gone. Stoney faces watched on.

Their gaze may well have been trained on Steve Bruce, who was completing his 1,000th game in management.

Sacking the 60-year-old, who has long been criticised by fans, would have been an easy way of signalling the new owners' intent and there were reports he would be sacked last week.

But by only confirming he would take charge against Spurs 45 minutes prior to his pre-match press conference on Friday, the club left the manager in an awkward position. It means the new owners have more questions to answer.

They have called for patience from fans as they apply a considered approach to the new era. For most of the match, it seemed to have been heeded by supporters, who wanted to make the party a positive one.

But with no answers coming from the Newcastle boss after 74 minutes, a chant of "we want Brucey out" rippled along the Gallowgate End and slowly grew around the stadium.

The volume increased as the game slipped away and although a brief hope returned with Eric Dier's own goal, by that stage the home fans had joined their Tottenham counterparts in singing "you're getting sacked in the morning".

All of a sudden it felt like nothing had changed at all.

Bruce says he will "crack on until I hear otherwise" but it may be that the performance sharpens a few minds as the new hierarchy seek to avoid the club getting involved in a relegation scrap.

It was a stark reminder - as if it were needed - that the owners welcomed as heroes have a major task on their hands.